Following delays caused by the COVID-19 pandemic, the Indian Space Research Organisation (ISRO) has said it will not be able to conduct the first uncrewed mission for its Gaganyaan programme in December as originally planned. The COVID-19 lockdowns disrupted hardware deliveries, and the fact that many people in the space agency were infected themselves, have cumulatively slowed the project down. ISRO Officials told PTI that the ‘first and second waves of the pandemic have severely affected the programme.’ 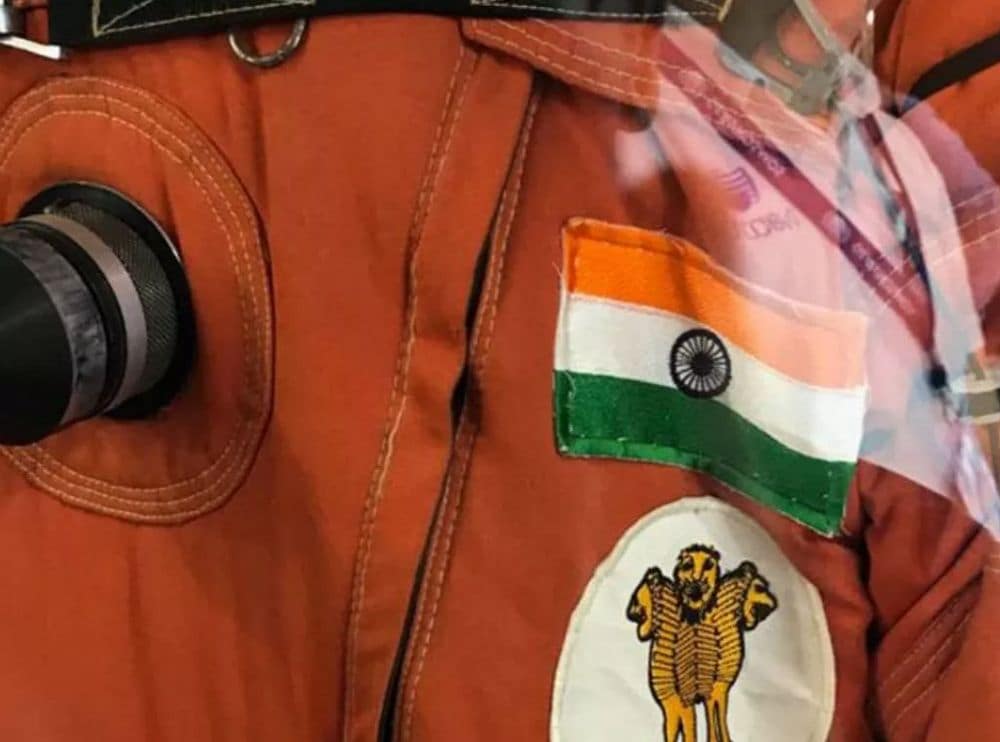 The ISRO space suit for astronauts in the Gaganyaan mission, displayed at the Bengaluru Space Expo. Image credit: Twitter/Nagarjun Dwarkanath

The hardware elements for the mission have been fabricated by the domestic industry, and lockdowns in different parts of the country at different periods have adversely impacted delivery schedules.

“Design, analysis and documentation are done by ISRO, while hardware for Gaganyaan is fabricated and supplied by hundreds of industries across the country”, an ISRO official told PTI.

“Most of our industry (supplying hardware for the programme) were closed (due to COVID-induced lockdowns). There was an impact on realisation of hardware systems. We expect some delay”, the official added.

Another official of the space agency said ISRO is trying to meet the target by putting in “extra hours, extra work.”

ISRO sources said most of the activities relating to the Gaganyaan programme are over, noting that the space agency was working on the project even a decade before the formal announcement was made nearly three years ago.

According to other sources, ISRO teamed up with the French, Russian and US space agencies for “some of the crucial activities and supply of components.”

“That way, we are not going to lose much time. But mainly because of closure of industries in India, it’s having an impact on the realisation of hardware. But still, we are trying to achieve the target for the mission set by the Government of India”, ISRO chairman K Sivan said earlier this month. He added that right now, he isn’t sure if ISRO will be able to meet the target for the manned mission, slated for August next year.

“It may be too early for me to commit. But we are trying to target the mission by that time,” Sivan, also Secretary in the Department of Space, had added.

ISRO’s heavy-lift launcher GSLV Mk III has been identified for the mission.

The focus of this mission is to send Indians to space and demonstrate the country’s capability to safely launch humans into space and bring them back without incident.

Four Indian Air Force candidates have already undergone training in Russia, and continued to train even during the pandemic.

Finance Minister Nirmala Sitharaman, during the 2021 Budget announcement, said she was positive things will be back on track this year. However, many of ISRO’s major programmes are falling behind schedule, including Chandrayaan-3, Mangalyaan 2, a mission to Venus – Shukrayaan-1 and Aditya-L1, the space agency’s maiden mission to the Sun.

In February this year, Jitendra Singh, the Union Minister of State (Independent Charge) of Space said the first unmanned mission is planned for December 2021 and the second unmanned one for 2022-23. This will be followed by the human spaceflight demonstration.

Previously, Sivan had said Chandrayaan-3 will likely be launched in 2022, while their second mission to Mars, Mangalyaan 2, will take place only after the third moon mission is launched. The first Indian human spaceflight mission Gaganyaan (that is supposed to send three Indians to space) will take place by 2022.

As part of ISRO’s mandate of Gaganyaan, two uncrewed flights need to be conducted before a crew can be launched. The flights are planned to test the end-to-end capacity for the manned mission.

However, a report from TOI states Sivan said the space agency might need to conduct more than two uncrewed tests as recommended by the national-level Gaganyaan Advisory Council (GAC). They will take a final decision after receiving data from the first two missions.

The report also states ISRO won’t be sending life support systems for the tests either.

Sivan said, “The GAC has advised that the first uncrewed mission should be carried out as soon as possible. Based on how the systems perform during the first and the second uncrewed missions and evaluation of the data, the GAC will decide if we need more missions before the astronauts are sent.”

The astronauts themselves will only fly to the Lower Earth Orbit (LEO) and return to land. However, the space agency still needs to decide if they will conduct seven or a maximum of fourteen orbits around the Earth before they land.

On 14 July, ISRO conducted a hot test for its Vikas engine that will be used in the GSLV MkIII vehicle. This was done as part of the engine qualification requirements for the Gaganyaan Programme. The engine test lasted for 240 seconds (four minutes). It took place at the ISRO Propulsion Complex (IPRC) in Mahendragiri, Tamil Nadu.

According to NASA, a hot test of a rocket engine includes adding propellant to the engines and then firing them up to test how they work.

In other news, ISRO also has plans to launch two earth observation satellites this year. EOS 3 and EOS 4 will be launched in August and September respectively, according to news reports. There has been no official confirmation from the Indian space agency on this front.

With inputs from PTI

Saved From Bulldozers, Baby Bird Steals Hearts Before its Return to Nature

The United States have regained the Ryder Cup and are set to beat Europe by a record score at Whistling Straits in Wisconsin.Open...
קרא עוד

Saved From Bulldozers, Baby Bird Steals Hearts Before its Return to Nature

The United States have regained the Ryder Cup and are set to beat Europe by a record score at Whistling Straits in Wisconsin.Open...
קרא עוד