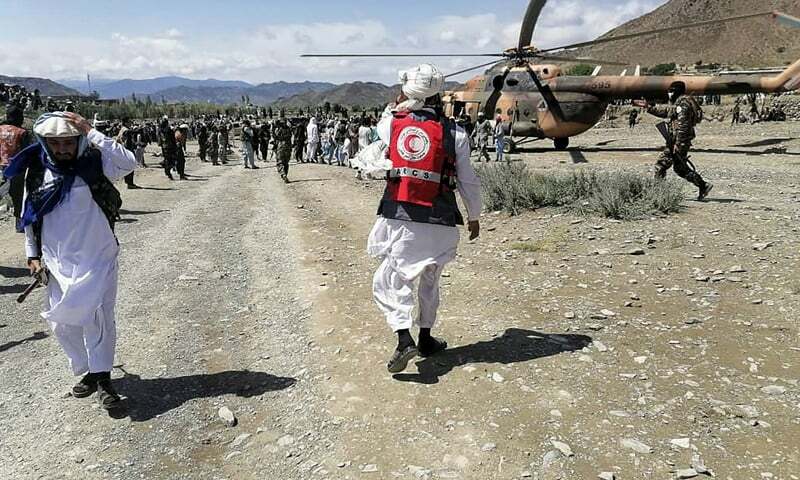 An earthquake of magnitude 6.1 killed 950 people in Afghanistan early on Wednesday, disaster management officials said, with more than 600 injured and the toll expected to grow as information trickles in from remote mountain villages.

Photographs on Afghan media showed houses reduced to rubble, with bodies swathed in blankets lying on the ground.

Helicopters were deployed in the rescue effort to reach the injured and fly in medical supplies and food, said an interior ministry official, Salahuddin Ayubi.

“The death toll is likely to rise as some of the villages are in remote areas in the mountains and it will take some time to collect details.”

Most of the confirmed deaths were in the eastern province of Paktika, where 255 people were killed and more than 200 injured, Ayubi added. In the province of Khost, 25 were dead and 90 had been taken to hospital.

Haibatullah Akhundzada, the supreme leader of the ruling Taliban, offered his condolences in a statement.

Wednesday’s quake was the deadliest since 2002. According to US Geological Survey, the earthquake occurred at 1:54am (PST), about 44 km (27 miles) from the city of Khost, near the Pakistan-Afghanistan border, at a depth of 51 km. The tremors were felt over some 500km by about 119 million people in Pakistan, Afghanistan and India.

In Pakistan, tremors were felt in Peshawar, Islamabad, Lahore, Kohat, Mohmand, Swat, Buner and other parts of Punjab and KP.

People left their homes in panic for safer places. “It was strong,” said a resident of Peshawar.

A report by the Khyber Pakhtunkhwa Disaster Management Authority said a man, resident of Lakki Marwat was killed in the earthquake after the roof of his room collapsed.

The disaster comes as Afghanistan has been enduring a severe economic crisis since the Taliban took over August, as US-led international forces were withdrawing after two decades of war.

In response to the Taliban takeover, many governments have imposed sanctions on Afghanistan’s banking sector and cut billions of dollars worth of development aid.

Humanitarian aid has continued and international agencies such as the United Nations operate in the country.

An Afghan foreign ministry spokesman said they would welcome help from any international organisation.

Large parts of South Asia are seismically active because a tectonic plate known as the Indian plate is pushing north into the Eurasian plate.

In 2015, an earthquake struck the remote Afghan northeast, killing several hundred people in Afghanistan and nearby northern Pakistan.

Immediately after the earthquake was reported, the government of Pakistan extended condolences and sympathies over the loss of lives and damage to property in the neighbouring country.

According to a Radio Pakistan report, Prime Minister Shehbaz Sharif said that Pakistan was standing with Afghan brothers and sisters in this difficult time and promised to provide all possible assistance.

“Armed forces of Pakistan are ready to provide all possible humanitarian assistance to people of Afghanistan,” he said.

In a statement, KP Chief Minister Mahmood Khan announced that the province would send medical teams to Afghanistan’s Paktika province.

Relief goods such as medicines, groceries and other assistance will also be dispatched, he said, directing the provincial health ministry and chief secretary to take immediate steps in this regard.

President Dr Arif Alvi expressed sympathies for the deceased and the injured people. “Pakistan stands in solidarity with the people of Afghanistan in this hour of need,” he said.

Foreign Minister Bilawal Bhutto Zardari also extended deep sorrow over the tragedy and urged the international community to play its role in providing humanitarian assistance to the Afghan people.

Separately, a statement issued by Ministry of Foreign Affairs said: “The people of Pakistan stand in strong solidarity with their Afghan brethren in this difficult time. We have no doubt that the brotherly Afghan people will overcome the effects of this natural calamity with their characteristic resilience.”

It added that Pakistani authorities and institutions were coordinating with relevant Afghan institutions to extend required assistance in the affected areas.

Meanwhile, former prime minister and PTI chairman Imran Khan said that he had asked the Khyber Pakhtunkhwa government to especially facilitate provision of all medical assistance to the neighbouring country.