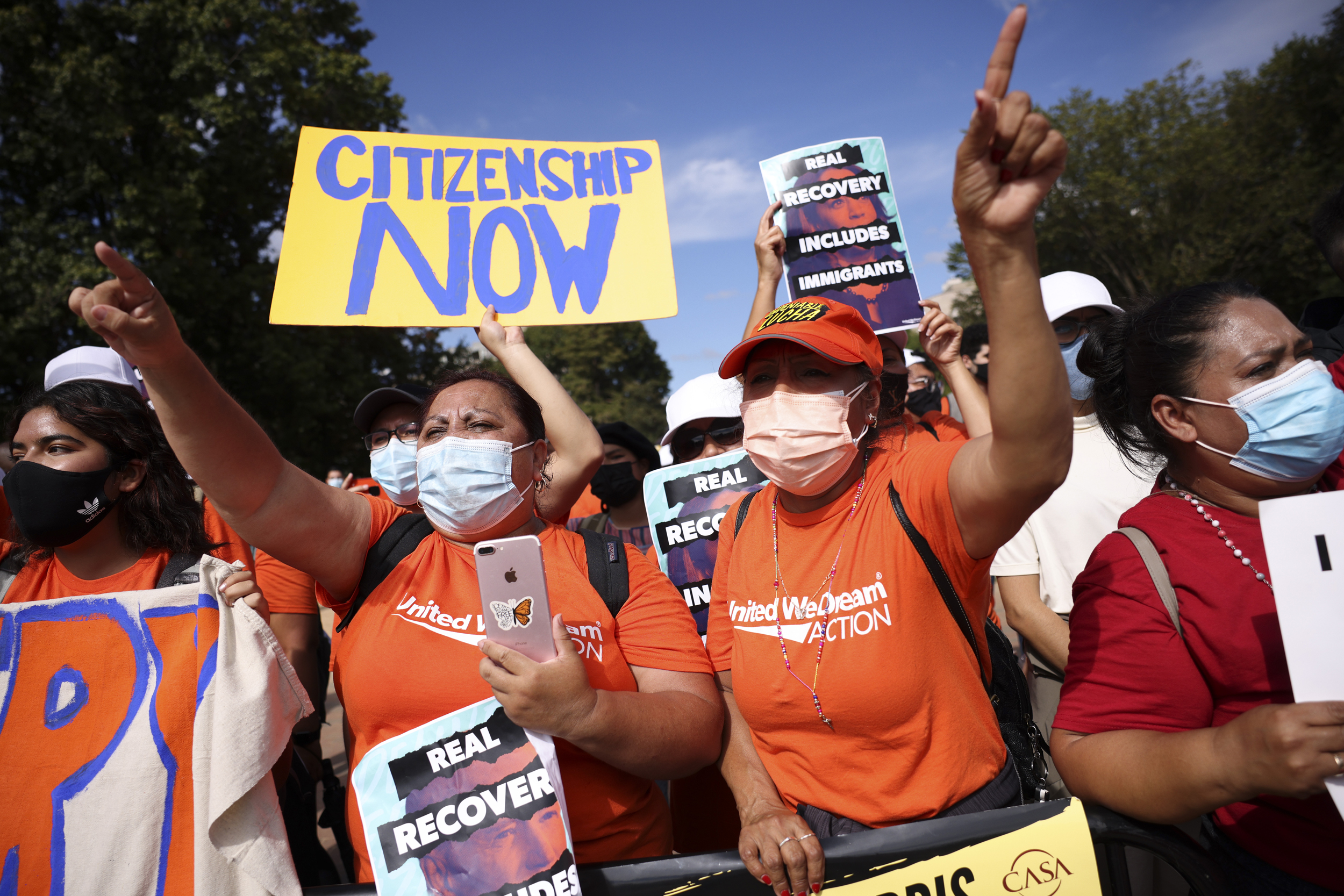 They face tough odds, but immigration advocates are pushing Democrats for a better deal in a bill heading for a vote for the millions of people living in the U.S. without legal immigration status.

Immigration advocates held a call Monday, hours before President Joe Biden signed a key part of his legislative agenda, a massive infrastructure bill that includes funding for roads, bridges, rails and other construction.

That bill includes an immigration “parole” provision that would give undocumented immigrants — some who have been in the U.S. for decades — permission to work and a temporary 10-year reprieve from deportation.

It takes the place of other proposals that would have given some immigrants green cards signifying permanent legal status, the route advocates prefer.

Advocates want to restore a provision that was yanked, which would have created a mechanism for undocumented immigrants who were here before 2010 to get green cards. They face an uphill climb to restore it.

Angelica Salas, the director of the Coalition for Humane Immigrant Rights, which is based in Los Angeles, said thousands of the group’s members “want a path to citizenship that begins with legal residency, not another temporary program.”

Murad Awawdeh, the executive director of the New York Immigration Coalition, said in a Zoom news conference representing immigrants of multiple racial and ethnic backgrounds: “The threat of deportation is always there. A pathway to citizenship is a pathway to stability.”

It’s not the first time undocumented immigrants have had to settle for less than they hoped for from Congress. Recently, in lieu of legislation, the administration has provided quasi-legal status to immigrants rather than any kind of legalization benefit.

Some immigrants have been content to accept being able to work legally with some protection against deportation. But the Trump administration’s effort to rescind temporary protections has reminded immigrants of the shakiness of such policies.

Zuleima Dominguez, a youth organizer for Make the Road New York, is enrolled in the Deferred Action for Childhood Arrivals program. President Barack Obama created the program, better known as DACA, by executive order in 2012, just before another midterm election and after Congress failed again to address immigration reform.

DACA has allowed her to remain in the U.S., work and go to college. But she noted that many resources, such as financial aid and scholarships, are closed to immigrants without legal status.

“I know the hard edge of temporary protection,” Dominguez said. “I lie with the fear that my DACA renewal will not be processed in time, which means losing my job. I know how a change in administration and Congress can end my life in a blink of an eye.”

The nonpartisan Congressional Budget Office has said it would complete its cost estimate for the legislation Friday, setting up a potential vote after it is released.

A watered-down immigration plan could have implications for Democrats in the midterm elections next year. Although undocumented immigrants can’t vote, many have family members who are citizens and do vote.

In a February 2020 Pew Research Center poll, Latinos were more likely to cite establishing a path to legal status for immigrants as a very important goal for the U.S.

Suzanne Gamboa is a national reporter for NBC Latino and NBCNews.com