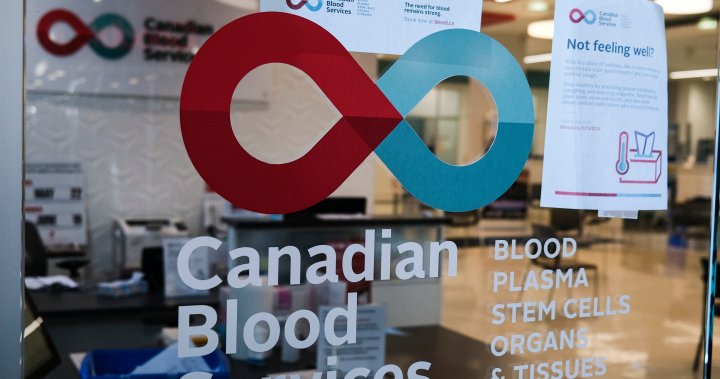 It was around 10 years ago that Terry Wagner began donating blood, later giving plasma, and then platelets.

Recently, Wagner received a pin and certificate from the Canadian Blood Services to mark his contributions, but he doesn’t donate for the accolades.

“There was a friend of mine in Halifax that had surgery this past weekend they needed 25 units of blood. If that donor on the other end of that system doesn’t make it happen, it just cascades into a lot of different things,” said Wagner, adding if he one day needs blood, he hopes there will be adequate resources.

Blood donation ban on men who have sex with men can end: Health Canada

Canadian Blood Services is in dire need of more consistent donors like Wagner to replenish inventory.

The national blood supply has drained, down 25 per cent since the start of April. In Atlantic Canada, there are 550 open appointments at donor centres, including 151 in Halifax, 158 in Moncton and 58 in Saint John.

Brandy Peters is the community development manager for Moncton and the eastern New Brunswick region at Canadian Blood Services.

“It’s unsustainable. We cannot rely on the generous donors that do give and give as much as they can to save us for long periods of time,” Peters said of current supply levels.

Previous waves of the COVID-19 pandemic at times slowed the number of donations.

Loosened restrictions have proved even more troublesome for donor attendance, as late cancellations and missed appointments influenced by recent illness are up 10 per cent since mid-March.

In the past, Peters said, summer has also proven to be a difficult period for blood donations.

“So we know that we need to be prepared for the coming summer months which is why we’re asking donors to book their appointments, you know, this week, next month, to keep donations constant. Think of this more as a marathon, not a sprint,” Peters added.

‘You may save a life’: Manitoba man donates blood 252 times

Peters said finding donors who get in the habit of visiting a center regularly can help provide a consistent supply.

She added the fear associated with donating can also deter people, and for a long time, it’s what kept Wagner away.

“I was apprehensive at first for sure, and that’s why I waited as long as I did to get into the system. But I think again, once you get into that rhythm and that’s part of it – they keep you at ease, they’re always mindful of your well-being while you’re there,” said Wagner.