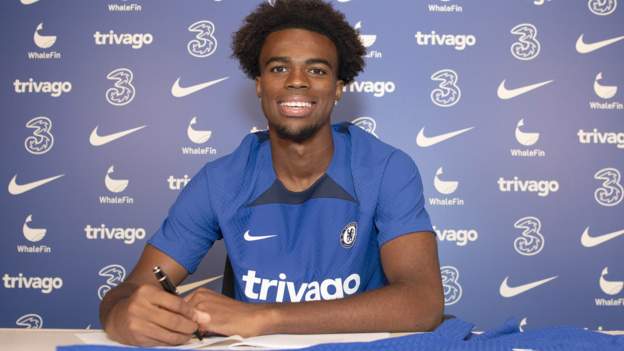 He was left out of Villa’s pre-season tour to Australia after refusing to sign a new contract.

“It’s been quite hectic but I couldn’t get Chelsea out of my head the last few days so I’m just happy and relieved that it’s all done,” said Chukwuemeka.

“I’m so excited and just can’t wait to get on the pitch, meet all the players and try to win games and trophies with Chelsea.”

Chukwuemeka, who made 12 appearances for Villa last season, was contracted until the end of the 2022-23 campaign.

Last month Villa boss Steven Gerrard said Chukwuemeka had not signed a contract offer which had been in place “for some time”.

He had been linked with Barcelona, AC Milan and Borussia Dortmund.

Chelsea chairman Todd Boehly said: “Carney is one of the most exciting young players in Europe so we are really looking forward to seeing him in action at Stamford Bridge.

“We are delighted to be able to bring him to Chelsea and add such a talented young individual to our squad for the new season and beyond.”

This summer Chelsea have brought in England forward Raheem Sterling from Manchester City for £50m and Senegal defender Kalidou Koulibaly from Napoli for £34m.

They also signed 18-year-old American goalkeeper Gabriel Slonina for a reported £12m from Chicago Fire, where he will remain on loan until the end of the Major League Soccer season.

Chelsea are on the verge of signing Spain defender Marc Cucurella from Brighton, who rejected a £30m offer from Manchester City in July.