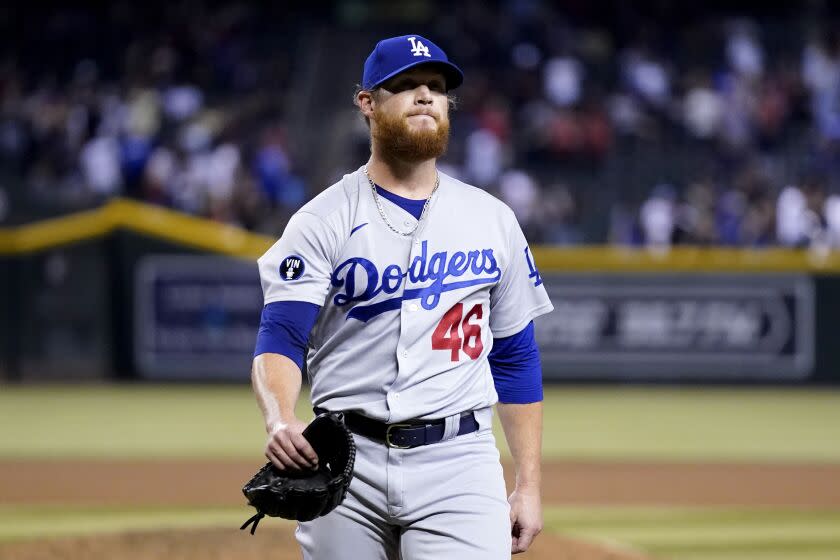 Craig Kimbrel let it go, then watched it leave.

With two outs in the bottom of the 10th inning Wednesday night, on the verge of his 23rd save and 10th consecutive scoreless appearance, the Dodgers closer tried to end the game with an elevated fastball.

Arizona Diamondbacks shortstop Sergio Alcántara ended it instead, hammering a walk-off three-run homer to give the Diamondbacks a 5-3 win.

In what started out as a sleepy contest that didn’t feature any of their top three hitters, nor one of their normal starting pitchers, the Dodgers were still leading going into the bottom of the 10th inning.

They had sent the game to extra innings after Diamondbacks designated hitter Jake McCarthy was thrown out trying to steal home with two outs in the ninth.

They went in front when their former reliever, Reyes Moronta, threw a run-scoring wild pitch in the top of the 10th.

Then came Kimbrel, summoned for the save amid a recent month-long turnaround in which he hadn’t given up a hit since August 17, had retired all 15 batters he’d faced this month, lowered his ERA by almost a run, and garnered some long-absent goodwill from the fan base after switching his entrance song to “Let It Go” from the Disney movie “Frozen.”

On Wednesday, however, there was no song — and no save from Kimbrel either.

He walked his first batter, bounced back with a couple quick outs, but then fell behind Alcántara with a high fastball and low curve.

In a 2-and-1 count, Kimbrel tried to come back with an elevated four-seamer. He missed his spot though, leaving it in what manager Dave Roberts called Alcántara’s “nitro zone” over the inner half of the plate.

“I think it just comes down to that last hitter,” Roberts said. “It’s a guy he knows he should get out.”

Instead, Alcántara sent it into the right-field seats, winning the game to help the Diamondbacks avoid a series sweep and reigniting questions about Kimbrel’s role on a playoff-bound Dodgers team.

A few weeks ago, when Kimbrel was still scuffling, Roberts said he didn’t know who would be closing games for the Dodgers in the playoffs.

On Wednesday night, he said that remained unchanged.

“If Craig continues to throw the baseball like has [recently, before tonight], I have all the confidence that he’ll finish games for us,” Robert said. “But, again, that’s contingent on what he’s been doing. He’s been striking the breaking ball and commanding the fastball. Tonight, it just wasn’t there for various reasons.”

Roberts thought Kimbrel’s inconsistent command might have been impacted having an automatic baserunner at second to begin the inning.

The right-hander offered up a much simpler explanation for his fifth blown save of the season, which pushed his ERA back over four to 4.03.

The game started with a spotlight on the players occupying the Dodgers bench.

A day after clinching the NL West, the team gave its three superstars — Freddie Freeman, Trea Turner and Mookie Betts — the day off.

While Betts has gotten the occasional off day this season, Turner had only missed one other game all year, while Freeman had played 141 in a row — a streak he tried to extend with some late-night texts to manager Dave Roberts on Tuesday night.

“I had a half-dozen texts from him petitioning,” Roberts said with a smirk, relaying that he reminded Freeman of the deal the two had about giving the first baseman the day off after they clinched.

“The manager won out,” Roberts added.

Still, after trailing 2-0 early when rookie spot starter Michael Grove gave up a couple early home runs, the Dodgers tied the score in the fourth on back-to-back home runs from Will Smith and Trayce Thompson.

Their bullpen kept it knotted from there, getting scoreless innings from Chris Martin, Alex Vesia and Tommy Kahnle, who struck out two batters and hit 97 mph with his fastball in his first game in four months after coming off the injured list this week.

Evan Phillips entered in the ninth inning and gave up a leadoff single to McCarthy, who then stole second before advancing to third on a grounder.

With two outs, he tried to catch Austin Barnes off-guard behind the plate, breaking for home as Barnes lobbed a ball back to Phillips between pitches.

Phillips alertly fired the ball back to Barnes, who applied the tag in time without violating MLB’s rules against blocking the plate, a call that was upheld even after a Diamondbacks challenge.

“We were just playing catch really,” Barnes said. “Threw it back to him, and he made the play.”

An inning later, Kimbrel couldn’t do the same, snapping the best stretch of his season with a scene eerily similar to his early-season struggles.

“Right now, Craig feels terrible,” Roberts said. “But the recent body of work, for me, I think I’m still very bullish on him.”