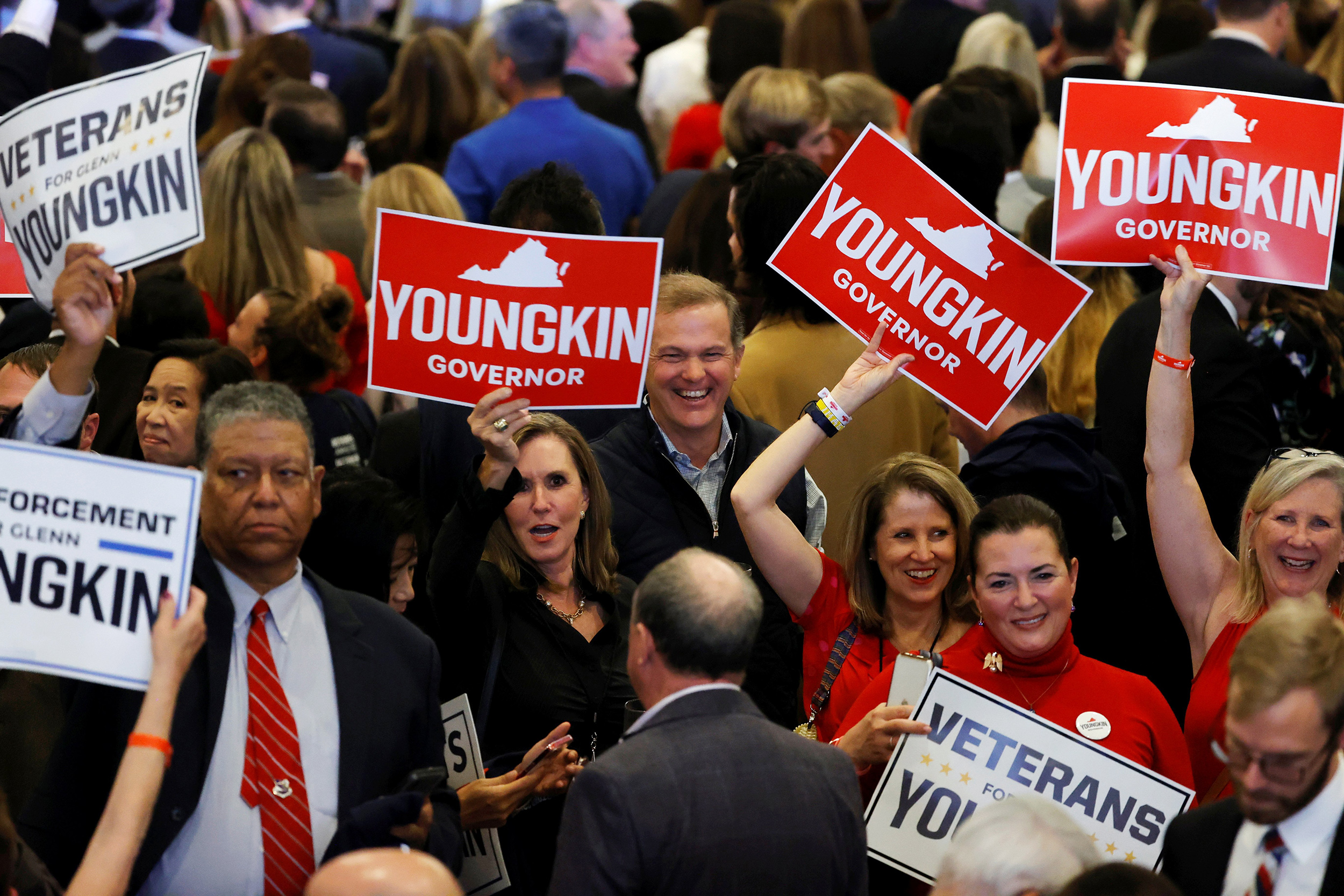 WASHINGTON — Days after Democrats’ devastating loss in the Virginia gubernatorial election this month, Danny Barefoot set out to talk to one of the most consequential swing group — women.

He held a focus group, assembling women who had voted for outgoing Democratic Gov. Ralph Northam and President Joe Biden before they switched to Republican Glenn Youngkin, opting to post the results in real time on Twitter.

The response was swift: A torrent of angry self-described liberals began responding to Barefoot’s findings, criticizing him for talking to the very voters who were responsible for Democrats’ losing control of the state. They called the women — who they assumed must be white — racists and argued that their opinions didn’t matter.

As the cliché goes, Twitter isn’t real life. But it does offer a glimpse into how the left flank of the Democratic Party responded to the Virginia defeat, chiefly by criticizing those who would vote against it and arguing that it wasn’t the message that was lacking but that voters who abandoned them were susceptible to racist dog whistles from the right.

Democratic strategists like Barefoot worry that that kind of response going into next year’s midterm elections is going to spell trouble for the party.

“You can waste your time screaming something that you believe is true, that’s great, or you can meet voters where they are,” he said in an interview, noting that his focus group included Black and Latina women, as well.

He said he expects Democrats to learn some lessons from Virginia, such as not repeating the decision of their nominee, Terry McAuliffe, to build his message around trying to convince voters that Youngkin was basically a replica of former President Donald Trump. It was a message that fell flat given Youngkin’s polished brand, financial background and unwillingness to fully embrace the former president.

But he said Democrats are often too quick to dismiss as nonissues concerns that originate in conservative media because of their source, even if the hyperbolic narratives play to real voter concerns.

That includes Republicans’ decision to hammer McAuliffe over education — they spent millions on an advertisement that suggested that he had said parents shouldn’t be allowed to make decisions about what is taught in public schools.

Democrats responding by calling Youngkin a racist. When Youngkin vowed that critical race theory, an advanced academic theory, wouldn’t be taught in schools, Democrats responded by pointing out take the schools already don’t and criticized his statements as a racist dog whistle.

Strategists say that failed to address the real concerns some parents — and nonparents — have about what is being taught in schools. Some in the party, especially those who have been warning for years about Democrats’ collapse in rural areas, don’t have much hope for a change of course.

“I feel like I’m yelling, screaming, and at some point it’s just like what’s the point of it all if I’m not being heard?” said J.D. Scholten, a former Iowa Democratic congressional candidate who runs a group focused on expanding the party’s nearly nonexistent footprint in rural areas. “There’s really not a policy driving the other side. It’s a culture war. So if we don’t find a way to counter the culture war, we won’t win.”

The official reaction from the White House is that the party struggled in Virginia and New Jersey because Congress didn’t pass Biden’s Build Back Better agenda in time.

“It should have passed before Election Day,” Biden told reporters the day after the vote. “I’m not sure that I would be able to have changed the number of very conservative folks who turned out in the red districts, who were Trump voters. But maybe. Maybe.”

Asked what the party needs to do differently to avoid similar losses over culture war issues next November, Biden said: “I think that the whole answer is just to speak the truth, lay out where we are. … And I think we’ll do fine.”

Neither answer offers much room for the kind of introspection and course correction many in the party say is needed to secure its future in an era when cultural fights dominate politics as much as policy ones.

Some Black leaders have urged the party to do a better job winning back white voters — who are still about 70 percent of the national electorate and an even larger share in key swing states like Pennsylvania — but Democratic insiders say it’s an issue that few progressive donors, thank tanks or party leaders are interested in prioritizing or are even comfortable discussing.

“There’s really no good way to talk about the fact that Democrats need to win white voters without it sounding like it’s at the expense of Black and brown voters. It doesn’t have to be. We can do both. But it’s sensitive,” said the leader of a prominent progressive group, requesting anonymity to speak candidly about an issue that is often discussed only in whispers or on the sidelines of major liberal donor conferences.

In the vast progressive ecosystem of liberal think tanks, super PACs and advocacy organizations, few are focused on rural or white-working class voters, even as progressive leaders speak often about the need to assemble a multiracial working-class coalition.

“Politics is not the world we would like it to be. It’s the world as it is. And the world as it is is a little bit racist. It sucks,” the operative said. “There’s this idea that our tent does not and should not include them — well, then, our tent is going to lose.”

The top-ranked Black leader in the House, James Clyburn, D-S.C., a key Biden ally, agreed “absolutely” in a recent interview with NBC News’ Chuck Todd that Democrats are uncomfortable in rural areas and are perceived as too cosmopolitan.

“There’s no question about that,” he said. “And when you look at that map you just put up, where the red is and where the blue is, that’s what it looks like.”

Rural areas aren’t just white, as Clyburn and many others note. Scholten thinks the next major Iowa Democratic leader from a rural area is likely to be Latino. The state’s farm-heavy areas are rich with Latino immigrants, many who came to do the hard work of agriculture.

Since Biden won last year and Democrats secured razor-thin majorities in Congress, the likelihood for many in Washington that they could lose one chamber or both next year has felt almost inevitable, and it possibly contributed to their lack of course correction.

Party leaders are only just now, for instance, starting to take concerns about inflation seriously, instead of blaming the media for allegedly overhyping rising gas prices or making fun of families that complain about rising milk prices for drinking too much milk.

There is little doubt that Republicans are going to spend the next year talking about how race is taught in public schools. But Democrats in Virginia and nationally have so far completely dismissed critical race theory as nothing more than a “racist dog whistle,” as McAuliffe put it.

While critical race theory, which is mostly taught at the university level, isn’t itself taught in Virginia schools, efforts to bring more diversity, equity and inclusion into teaching are real, and Democrats should defend them instead of pretend they’re fiction, educational historian Natalia Mehlman Petrzela argued in a recent Washington Post op-ed.

Barefoot said that while critical race theory, or CRT, was a dog whistle for a segment of conservatives voters, it resonated with a larger group of especially older voters — and not just white ones — who want to be proud of their country and worry about getting shamed for accidentally transgressing new social norms.

“The reason these attacks are landing isn’t because CRT is taught everywhere or because every swing voter is a racist. The reason is that they think — and it’s an accurate assessment, frankly — Democrats don’t view this country the same way they do,” he said. “I know, as a professional Democrat, I’m in rooms very regularly where if I said I’m proud to be American, it would be a social faux pas.”

Most voters, he said, want to be on the right side of history, and Republicans have paid electoral prices for supporting policies like North Carolina’s ban on allowing trans people to use the bathrooms of their choice.

But in a culture war, Democrats can pay a price not just for policy they make, but also for perceptions of elite cultural creators in Hollywood and academia, fairly or not. And that’s a much thornier issue to resolve.

“Voters need to see us as normal. Just normal people,” he said. “Where we lose them on these wedge issues is if people feel like they’re going to be labeled a bigot if they don’t use the right words.”