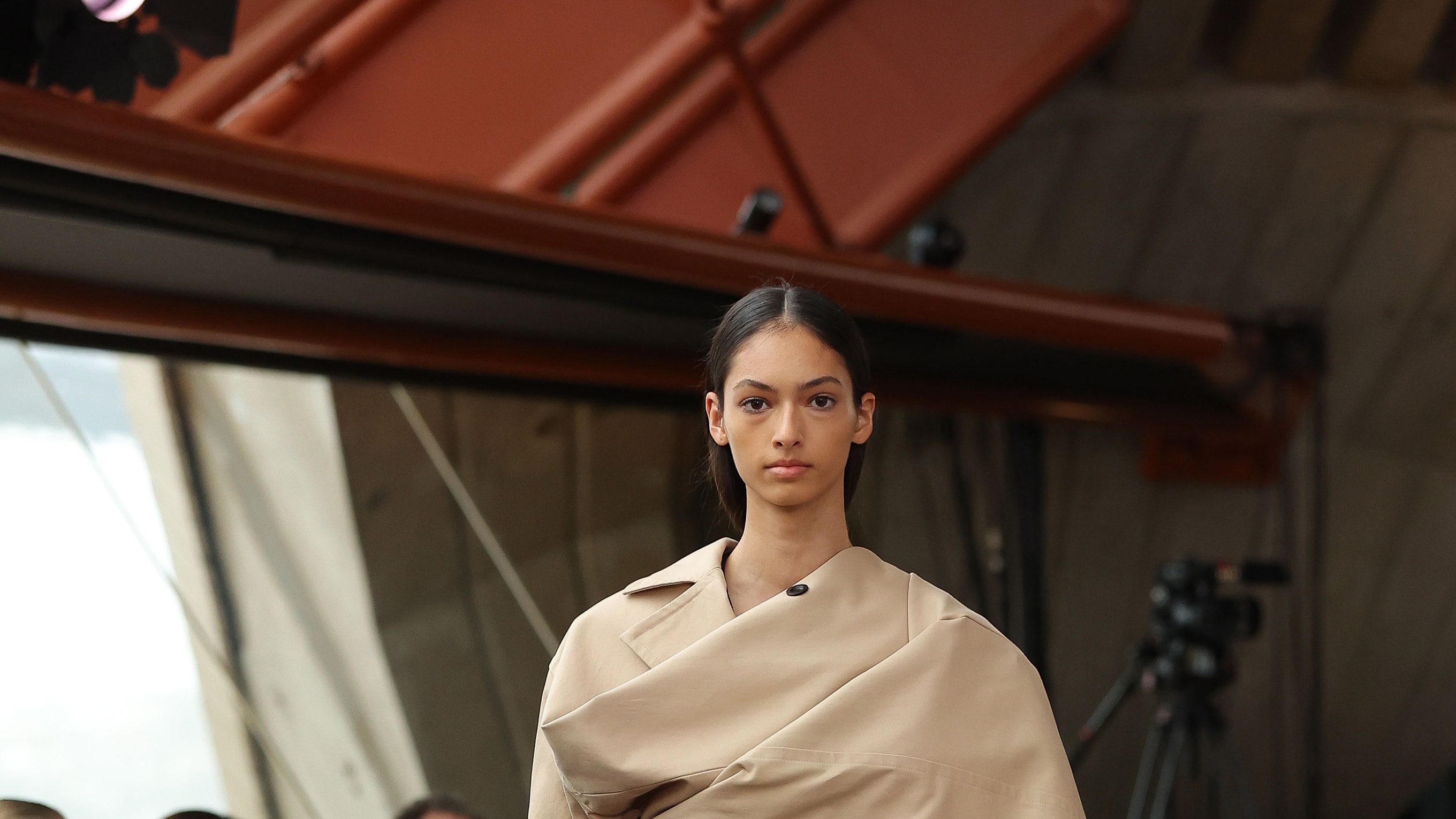 Charlotte Hicks was feeling surprisingly serene after Esse Studios’s Australian Fashion Week runway debut. “It’s the setting. You can’t help but let go and unwind and just lose yourself in this incredible space,” she said post-show, gesturing to the vaulted granite ceilings of the architectural jewel that is the Sydney Opera House. Her mood jibed perfectly with the collection itself, anchored as it was in a Zen-like palette of putties, taupes, and blacks, and expressed via the fuss-free elegance and monastic silhouettes she is becoming known for.

If things looked familiar, that was deliberate. She chose the occasion to celebrate a mix of past seasons from her four-year-old slow-fashion label, making a statement about the way we think about newness in the process. To wit: Her popular tailored trousers were refreshed in silk, cut roomy and slung low on the hip. Outerwear was likewise lightly evolved from former outings and included duster coats, lean blazers, and a white overcoat with bishop sleeves in softest wool that read simultaneously cozy and luxurious.

To know about Hicks: She’s a stickler for sustainability. She’s just embarked on the involved process of earning B Corp certification, 98% of her pieces are made locally in Australia and she has close relationships with the mills in Italy, Japan, and Australia including an over 90-year-old family-run Melbourne business that knit her slinky fine-gauge dresses. Frustrated by the volume of waste she saw across a decade working at other fashion labels, Hicks launched Esse Studios n 2019, and the pandemic only galvanized her pursuit of considered design. She’s currently exploring her upcycling practice. “I’m really passionate about trying to be more accountable for my waste, so the circularity component is huge for me. There’s actually some pieces in there that are limited in their productions, upcycled versions of my own excess stock.” Like a skirt made into a silk top. “I’m not putting them on sale. I’m being creative with what I’m sitting on.”

But the elevated staples are just one prong to her approach. To reinvigorate a wardrobe, she peppers in what she’s dubbed accent pieces—like a sinuously draped stringy asymmetrical top, deftly folded on one side to wrap around a shoulder, or a draped and folded maxi dress, spliced to reveal the collarbone, in a warm shade of chocolate. The idea is not to do trend pieces, but for them to be considered enough to become future heirlooms, in the way her mother and grandmother handed keepsake clothing on to Hicks.

For her show debut, the designer is calmly asking: What has enough design integrity to warrant the space it will take up in our wardrobes? Questioning is something she was doing right up until the minute the models walked. “Do you feel good?” “Do you feel comfortable?” she asked. As long as the answer is yes, Hicks is on an upward trajectory.