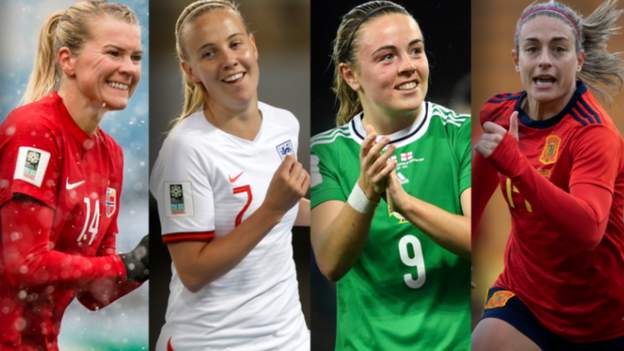 Sixteen teams – including debutants Northern Ireland and holders the Netherlands – will compete, with the final to be played at an 87,200 sell-out Wembley on 31 July.

More than 450,000 tickets for the tournament, which is being staged at 10 different venues across the country, have been sold so far.

All 31 matches will be shown live across the BBC.

It is the second time the whole tournament has been held in England.

Back in 2005, just eight countries took part as Germany defeated Norway 3-1 in the final in front of 21,105 at Blackburn’s Ewood Park.

Seventeen years on, Uefa has labelled the 13th edition as the “biggest ever”.

Despite qualifying, Russia have been barred from this summer’s competition because of the country’s invasion of Ukraine. Their place has been taken by Portugal.

The tournament is expected to deliver £54m in economic activity to the host towns and cities: Manchester, Southampton, Brighton, Milton Keynes, London, Leigh, Sheffield and Rotherham.

Almost 100,000 international fans are expected to attend matches while a global television audience of 250 million-plus is expected to watch Euro 2022.

This will be the first time that Video Assistant Referee technology has been used at a Women’s European Championship.

The Women’s Euros is usually held every four years and, after the Netherlands won it in 2017, it should have taken place in 2021.

It was pushed back 12 months after the men’s 2020 European Championship and the 2020 Tokyo Olympics were both postponed until 2021 because of the coronavirus pandemic.

Moving the Euros to 2022 avoided two women’s tournaments in the same summer, with Sweden losing on penalties to Canada in the gold medal match in Tokyo 12 months ago.

England were named hosts in 2018. When England previously staged the tournament in 2005, venues across the North West – Blackpool, Manchester, Blackburn, Warrington and Preston – were used.

This time games are being staged across the country although no venues in the Midlands or North East will host games.

The decision to use the Manchester City Academy Stadium – which will have a reduced capacity of just 4,700 for the Euros – has been criticised.

“It’s disrespectful towards women’s football because it’s so much bigger than people think.”

The previous edition staged in the Netherlands was watched by 240,045 fans.

Ticket prices have been kept low to attract families. They range from £5 to £50 meaning a family of four can watch a match for as little as £30.

“We want as many full stadia and as many spectators in the stadiums as possible,” the head of tournament delivery, Chris Bryant, said.

There is pressure on the organisers to deliver an event that draws fans in beyond the Euros.

“We are confident that many matches will be sold out and are looking forward to more than doubling the total attendance of Uefa Women’s Euro 2017 in the Netherlands,” said a Euro 2022 spokesperson.

Which countries are taking part – and who are the big hitters?

This is the second time the tournament has featured 16 teams.

Norway and Italy are taking part for the 12th time – no other countries have played in more.

Only four different countries have won the Women’s Euros.

The 16 teams are divided into four groups of four. The top two go through to the quarter-finals, where it becomes a straight knockout.

England boss Sarina Wiegman led her native Netherlands to European glory five years ago, and the Lionesses are among the favourites.

Other teams expected to do well include Spain, 2019 World Cup finalists the Netherlands and Sweden, who have reached the final four times.

France’s squad includes several members of the Lyon side that won the Champions League in May.

Five players to look out for

Ada Hegerberg (Norway): Quit the national team in 2017 in protest at a perceived lack of respect for female players, but the inaugural Ballon d’Or winner returned to the international scene in April and is looking to make her mark at Euro 2022.

Vivianne Miedema (Netherlands): The Arsenal striker is at the top of her game and is hoping to add another European title to her CV after helping the Netherlands win Euro 2017.

Pernille Harder (Denmark): The Chelsea midfielder is Denmark’s all-time leading scorer and captained them to the Euro 2017 final.

Lauren Hemp (England): The Manchester City winger, 21, who was named the Women’s Super League’s young player of the year for a record-breaking fourth season in a row, has been on-fire for club and country, winning many plaudits for her eye-catching runs and goals.

There is pressure on the Lionesses to deliver a first European crown in front of their own fans.

They have twice come close before, finishing runners-up to Sweden in the inaugural Women’s Euros in 1984 before getting to the final again in 2009 only to lose to Germany in Finland.

Since Wiegman became manager in September 2021, England are unbeaten in 12 matches and in February won the inaugural Arnold Clark Cup – a competition that featured Olympic champions Canada, Spain and two-time world champions Germany.

“This is going to be the biggest women’s event in Europe ever,” Wiegman told BBC Sport.

“It’s going to be really exciting but it can also cause a little stress. There are going to be expectations but we have to embrace it.

“This is a chance to make everyone proud.”

Euro 2022 marks a huge moment in the history of women’s football in Northern Ireland. The national team only reformed in 2004 after being disbanded at the turn of the century.

Whatever happens this month, Northern Ireland have already defied the odds to reach one of the biggest stages in the sport as a team largely made up of part-time players.

Kenny Shiels’ side are the lowest-ranked team in the competition – 47th in the world.

In April, Shiels said “women are more emotional than men” when discussing his side’s 5-0 defeat by England in a World Cup qualifier.

His remarks drew criticism and Shiels apologised saying: “I am proud to manage a group of players who are role models for so many girls, and boys, across the country.”

The BBC will give audiences 24/7 access to all of the action, analysis and insight across TV, radio and online during the tournament.

Every England and Northern Ireland game will be broadcast live on BBC One. Most games will be BBC One or Two, with all 31 matches on BBC iPlayer. Former Arsenal and England players Alex Scott and Ian Wright are among the pundits.

BBC Radio 5 Live will also have commentary on selected games.