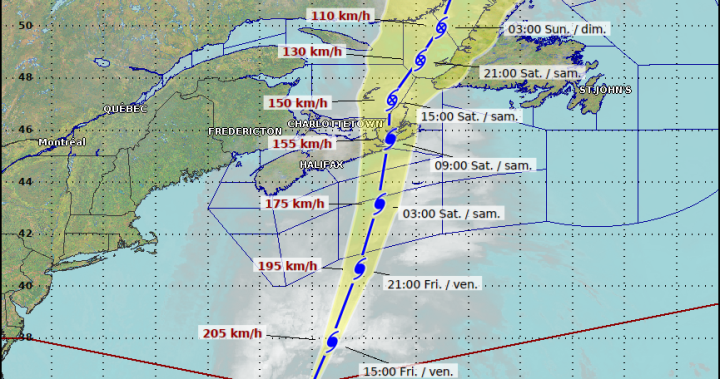 Hurricane and tropical storm warnings have been issued across eastern Canada as Hurricane Fiona hurtles toward the region, slated to make landfall in Nova Scotia as a powerful post-tropical storm early Saturday morning.

In a tweet early Friday morning, the Canadian Hurricane Centre said Fiona looks to be a “historic storm” for eastern Canada.

🌀 The 3 AM ADT updated track and bulletins have been issued for #Fiona. #Hurricane and #TropicalStorm WARNINGS are now in effect for what looks to be a historic storm for eastern Canada. https://t.co/QURfkCQp7W

As N.S. braces for Fiona, here’s how it could compare to Juan and Dorian

Most of the affected regions will experience hurricane-force winds beginning late Friday continuing into Saturday.

“Similar cyclones of this nature have produced structural damage to buildings. Construction sites may be particularly vulnerable,” the statement said.

“Wind impacts will be enhanced by foliage on the trees, potentially causing prolonged and widespread utility outages.”

As of 9 a.m. Friday, Hurricane Fiona was about 1,165 kilometres south-southwest of Sable Island, with maximum sustained winds of 204 km/h, moving northeast at 50 km/h.

Earlier this morning, the Canadian Hurricane Centre says there will only be a “slight decrease” in the storm’s intensity over the next 12 hours “as the hurricane travels in a moist environment, over very warm waters, and under little shear.”

The hurricane is expected to accelerate as it interacts with a trough approaching from the west later on Friday.

The Canadian Hurricane Centre said in addition to the wind, there will be “very significant” rainfall, especially north and west of Fiona’s track, where heavy rain could lead to flooding.

The heaviest rainfall is likely to hit eastern Nova Scotia, southwestern Newfoundland, and the Gulf of St. Lawrence region.

“Forecast guidance is suggesting widespread amounts of 100 to 200 mm, but closer to the path of Fiona, more than 200 mm is likely,” the statement said.

“Some districts have received large quantities of rain recently, and excessive runoff may exacerbate the flooding potential. Road washouts are also possible.”

Rainfall warnings have been issued for most of Nova Scotia, P.E.I., and southeastern New Brunswick.

The storm will also drum up “rough and pounding surf,” especially for parts of Nova Scotia, the Gulf of St. Lawrence and Newfoundland.

Parts of Nova Scotia could see waves up to 10 metres Friday night, while Newfoundland and eastern portions of the Gulf of St. Lawrence and the Cabot Strait could see waves in excess of 12 metres.

The western Gulf, meanwhile, could see waves up to eight metres, “which will probably cause significant erosion for north facing beaches of Prince Edward Island.” Iles-de-la-Madeleine will also see some coastal erosion from waves, it said.

Hurricane Fiona: A list of cancellations as Nova Scotia prepares for storm

“Coastal flooding will also be a threat for parts of Nova Scotia, Prince Edward Island including the Northumberland Strait, the Gulf of St. Lawrence region including Iles-de-la-Madeleine and eastern New Brunswick, and southwest Newfoundland,” the Canadian Hurricane Centre said.

“The highest risk for coastal flooding will be a combination of storm surge with large waves moving onshore. There may also be some coastal flooding for the St. Lawrence Estuary and the Quebec Lower North Shore.”

For most areas, the highest water levels will be near high tide some time on Saturday morning.

Storm surge warnings have been issued for most of the Gulf of St. Lawrence, southwestern Newfoundland, eastern Nova Scotia and the east coast of New Brunswick.

Nova Scotia’s Emergency Management Office is asking people to prepare for the storm and possible extended outages by doing the following: