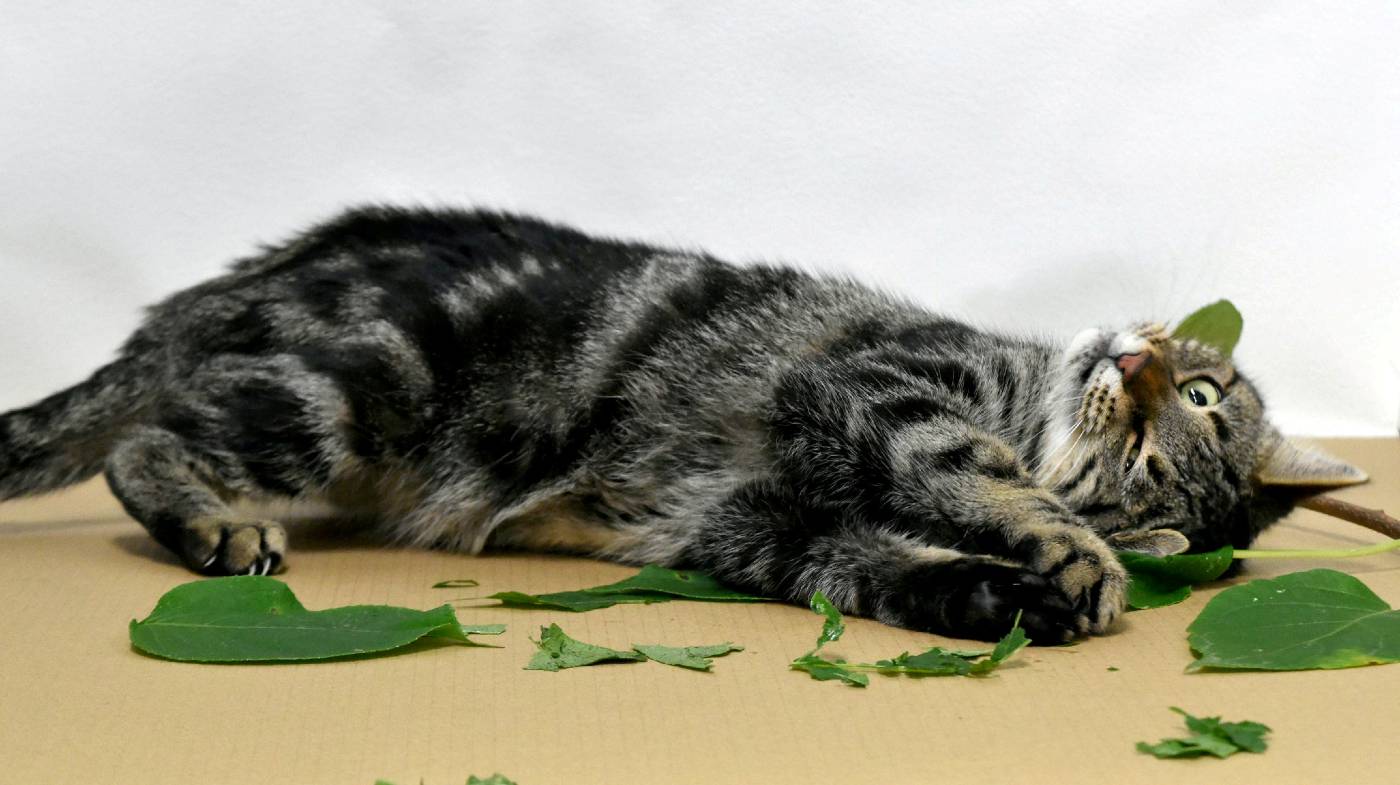 Catnip, renowned for bringing an adrenaline-like rush to even the most docile cats, has actually been discovered to have distinct benefits.

It is widely accepted that this plant, and its Asian counterpart, silvervine, have intoxicative properties—but this might not be the only reason that cats rub on it and chew up the plants so enthusiastically.

Researchers in Japan have found that when cats dig into catnip, high amounts of strong insect repellents are released, indicating that the addictive behavior of our furry friends is protecting them from pests.

Cats’ reaction to catnip and silvervine is so ubiquitous that lead author Masao Miyazaki, an animal behavioral researcher at Iwate University, wanted to know what was going on. “Even in the famous musical Cats there are scenes where you see a cat intoxicate another cat using catnip powder,” he says. Miyazaki began his career in veterinary medicine and developed an interest in how chemicals, such as pheromones, drive companion animals’ instinctual behaviors.

Catnip and silvervine leaves contain the compounds nepetalactol and nepetalactone, iridoids that protect these plants from pests. The iridoids trigger an endorphin rush in cats, causing them to lick, chew, rub against, or roll around on catnip (Nepeta cataria) and silver vine (Actinidia polygama).

Other animals, like chimpanzees, use these natural plant-based compounds as bug repellents, too.

LOOK: Man Goes to Rescue a Kitty and is ‘Ambushed’ By 12 More in a Roadside Meet-Cute

To see how cats’ behavior was affecting the chemicals released by the plants, Miyazaki worked with chemists at Nagoya University. “We found that physical damage of silvervine by cats promoted the immediate emission of total iridoids, which was 10-fold higher than from intact leaves,” says Miyazaki.

“Although this has often been interpreted by pet owners as a playful behavior among cats that appeared to be intoxicated by these specific plant species, we demonstrated in a recent study that the rubbing and rolling behavior can protect cats from mosquito bites,” wrote the authors of a new paper published in iScience.

It seems that cats, whether consciously or unconsciously, know exactly what they must do to benefit from the iridoids contained within these two plants. For example, the incessant chewing of the silver vine leaves in the study, greatly increased the secretion of iridoids necessary for insect protection, but the cats swallowed very little—often none, of the plant material.

Furthermore, if given the choice between unchewed leaves and chewed-up leaves, the cats overwhelmingly will go and interact with the chewed leaves, and when non-chewed leaves were coated in a synthetically-produced complex of these iridoids, the majority of cats chose to interact with the more diverse complex, which in turn dissuaded the largest number of mosquitoes.

Not only were more iridoids released, but their composition changed in ways that seemed to encourage the cats. “Nepetalactol accounts for over 90% of total iridoids in intact leaves, but this drops to about 45% in damaged leaves as other iridoids greatly increase,” says Miyazaki. “The altered iridoid mixture corresponding to damaged leaves promoted a much more prolonged response in cats.”

In previous work, Miyazaki and his team showed that these compounds effectively repel Aedes albopictus mosquitoes. And, before investigating house cats, the same team had observed both jaguars and cougars rubbing their heads against paper soaked in nepetalactol, the main iridoid in silver vine.

RELATED: Cats Are Less Stressed in Families With Children Who Have Autism, Study Finds

To test if the felines were reacting to these compounds specifically, the cats were given dishes with pure nepetalactone and nepetalactol.

“When iridoid cocktails were applied on the bottom of dishes that were then covered by a punctured plastic cover, cats still exhibited licking and chewing even though they couldn’t contact the chemicals directly,” says Miyazaki. “This means that licking and chewing is an instinctive behavior elicited by olfactory stimulation of iridoids.”

LOOK: Stray Cats Saved a Restaurant During the Pandemic By Lounging On Miniature Models in the Window (LOOK)

“Catnip and silver vine could be useful for protecting humans from insects as well,” reports Smithsonian. “The species of mosquito used in this study transmits roundworms to cats and dogs and also spreads many human viruses, like dengue and chikungunya.”

Catnip grows pretty easily and can be bought online or at many garden stores. Letting it grow in your garden means you can also benefit from its flowers and mint-like properties for homemade tea. The plant is drought-tolerant and deer-resistant. It can be a repellent for certain insects, including aphids and squash bugs, as well as mozzys!

RAISE a Paw for Fascinating Research; Share This Story…

B.C. Women Get an Up-Close Encounter with Humpback Whale off Coast of Vancouver Island