54 years ago today, Elton John and his songwriting partner Bernie Taupin were signed by DJM publishing. Their signatures had to be witnessed by their parents because they were both under 21 years of age.

Taupin answered an advertisement for a lyric writer that appeared in the New Musical Express—and the pair have since collaborated on over 30 albums. (1967)

More Good News on this Date: 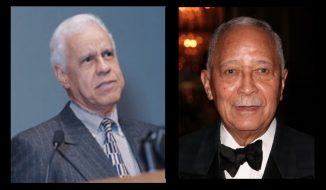 The attorney and veteran was a state senator and lieutenant governor and, later, the mayor of Virginia’ capital city, Richmond… Also, on the same day, David Dinkins was elected as the first African-American mayor of New York City. (1989)

And 31 years ago today, Irishwoman Mary Robinson became the first woman to be elected President of the Republic of Ireland. The Independent politician was the seventh President of Ireland, serving through 1997. She is widely regarded as a transformative figure for Ireland—and for the Irish presidency—revitalizing and liberalizing a previously conservative, low-profile political office. 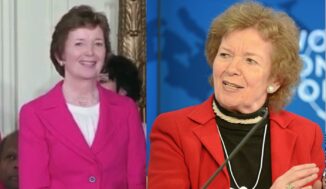 Now 76 years-old, Mary Robinson also served as United Nations High Commissioner for Human Rights, and in 2010 set up The Mary Robinson Foundation for Climate Justice, which aimed to advocate on the struggle to secure global justice for victims of climate change “who are usually forgotten.”

In 2007, GNN covered her collaboration with Nelson Mandela, Graça Machel, and Desmond Tutu in a group called The Elders—formed with the hopes that their wisdom, independent leadership, and integrity could help tackle some of the world’s toughest problems. (1990)

And, Happy Birthday to Joni Mitchell who turns 77 today.

The Canadian singer-songwriter and painter is one of the most influential female musicians of the late 20th century. Her many hit songs include ”Both Sides Now,” “Chelsea Morning,”  “Big Yellow Taxi,” “A Case of You,” “River,” “California,” and “Free Man in Paris”—all recorded before she was 32.

Her distinctive open-tuned guitar was prompted by her childhood bout with polio which afflicted her fingers. Joni said the improvised tuning freed her songwriting, and was “a tool to break free of standard approaches to harmony and structure”.

Four years ago she suffered a brain aneurysm and she also suffers from a rare disorder called Morgellons disease. She just released a new book of drawings and writings, Morning Glory on the Vine: Early Songs and Drawings, and a biography about her life, Reckless Daughter, was released in 2017. Wish her a happy birthday at WeLoveYouJoni.com. (1943)