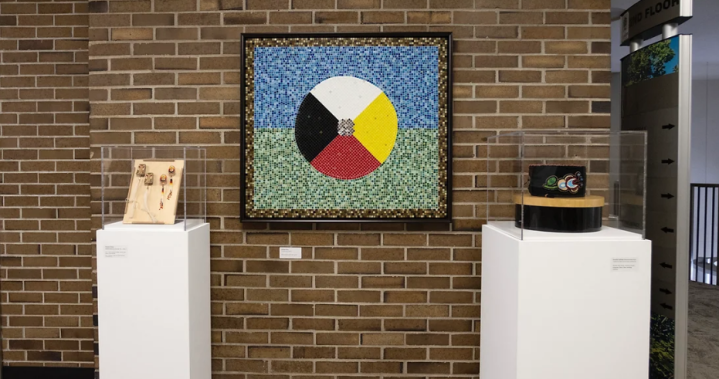 In anticipation for the second National Day of Truth and Reconciliation on Friday, local Indigenous art has been on display in London, Ont., city hall over the month of September.

Spearheaded by the London Arts Council and Indigenous London Arts, each piece “represents various themes that speak to Indigenous worldviews and experiences.”

“The importance and the purpose of that project was that we made a commitment that the city really needs to take it seriously about building relationships with Indigenous communities,” said Eunji Yi, executive director of the London Arts Council.

Giizhik [cedar] Medicine Earrings created by Chandra Nolan have also been up for display and are considered a sacred medicine to Indigenous people, “with healing properties used during fasting and sweat lodge ceremonies as a form of protection and cleansing as well as a medicinal tea.”

Additionally, the display features “The Medicine Wheel,” created by Brenda Collins, a 69-year-old Metis artist who also identifies with her mother’s culture of Odawa from the Shuguang First Nation reserve on Manitoulin Island.

According to Collins, the inner circle of her piece represents the circle of life, including all of humanity, the four seasons, and the four human needs; “physical, mental, emotional, and spiritual.”

Also known as the “Healing Circle,” Collins said her piece is “an Anishinaabe cultural icon.”

“It encompasses everything that I think is important, which is the inclusion of everybody,” she said.

“No matter who you are, what culture you are, what age you are, everything and anything about you is included in that medicine wheel. So, I particularly like it because I feel like it’s reaching out to all cultures across the world.”

Collins explained that her mosaic also illustrates seven directions: east, south, west north, “everything above, everything below, and the mirrors, which show your innermost thoughts and feelings,” as the small squares represent people interacting with the environment.

“I think that we all desperately need to be aware of the past, and the truth of the past so that it is never repeated, and that goes for different cultures as well,” she said. “Knowledge is in all directions of the medicine wheel, so I think the community needs to understand that once you step inside that sacred circle, let as much of the trauma go as you can and allow yourself to begin to heal.

“Open your heart and mind to all the valuable knowledge that different cultures can offer you,” Collins added.

Following its current location at City Hall, The Medicine Wheel will be moved to the London Arts Council office.

The Traditional Métis Ceremonial Smoking Hat and the Giizhik Medicine Earrings will later be on display at the Tourism London Welcome Centre on Wellington Road South.

Here’s who gets the Sept. 30 holiday off in Ontario

However, in creating a more permanent display, the N’Amerind Friendship Centre and the London Arts Council, along with the city, have been working together to develop a two-story, seven-panel Indigenous mural to honour the legacy of Residential School Survivors and the children who never returned home.

The mural, titled “We Are Still Here,” led by Mike Cywink, an Ojibwe educator and visual artist, is set to be unveiled at the N’Amerind Friendship Centre on Friday at 2 p.m.

September 30th #NationalDayforTruthandReconciliation is happening in a few days. Join us at The Green in Wortley Village as we come together to honour our past and present relatives. The gathering will feature Singing, Dancing, Prayer, Information Booths, and more. #LdnOnt pic.twitter.com/MOzLE0ibRh

In marking the second National day of Truth and Reconciliation, Atlohsa Family Healing Services is hosting a Gathering on the Green in Wortley Village to honour Indigenous culture as well as past and present relatives with drumming, jingle dress dancing and smoke dancing, language workshops and more.