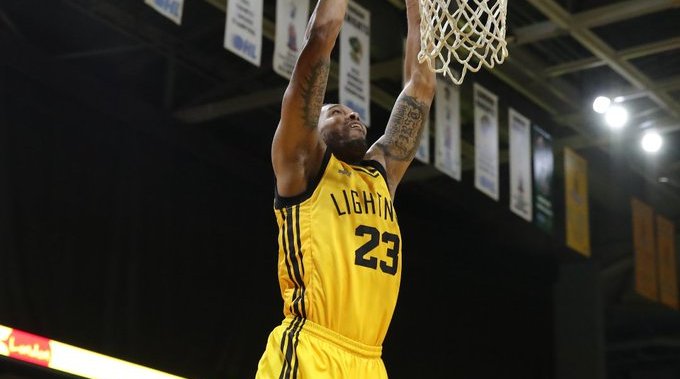 The London Lightning rode a big third quarter to a 2-0 series lead as they knocked off the Windsor Express 107-97 on Tuesday night at Budweiser Gardens.

With the Express ahead by five points coming out of halftime, London outscored Windsor 34-17 to begin the second half to move one victory away from the National Basketball League of Canada championship series.

The Lightning showed off their depth as five players scored in double figures led by Jermaine Haley who had 27 points.

On the day Terry Thomas was named the NBLC’s Sixth Man of the Year, the Dartmouth, N.S., native was put into the starting lineup by London head coach Doug Plumb and stayed on the floor nearly all night as he played 46 of the 48 minutes in the game.

Thomas ended with 22 points and 12 rebounds. Thomas averaged 17 points per game in the regular season which ranked ninth overall in the league.

Amir Williams also had a double-double for the Lightning with 16 points and 11 rebounds.

Cameron Forte also had 16 points coming off the bench for London.

William Claiborne had team-high 27 points for the Express while Billy White added 24.

Both teams shot below 30 per cent from the three-point range.

In the other NBLC semi-final series, the Sudbury Five rebounded from a Game One loss to blow out the K-W Titans 112-86 to even their series 1-1 heading to Kitchener-Waterloo.