Molly-Mae Hague has discussed the moment she found a lump on her breast, saying it was the size of a ‘golf ball’.

The former Love Island star, 22, previously had surgery in September to remove a lump after a biopsy revealed it had gown in size.

Taking to her Instagram Stories on Monday, Molly-Mae told of her experience as she answered a fan who said she had also recently found a lump. 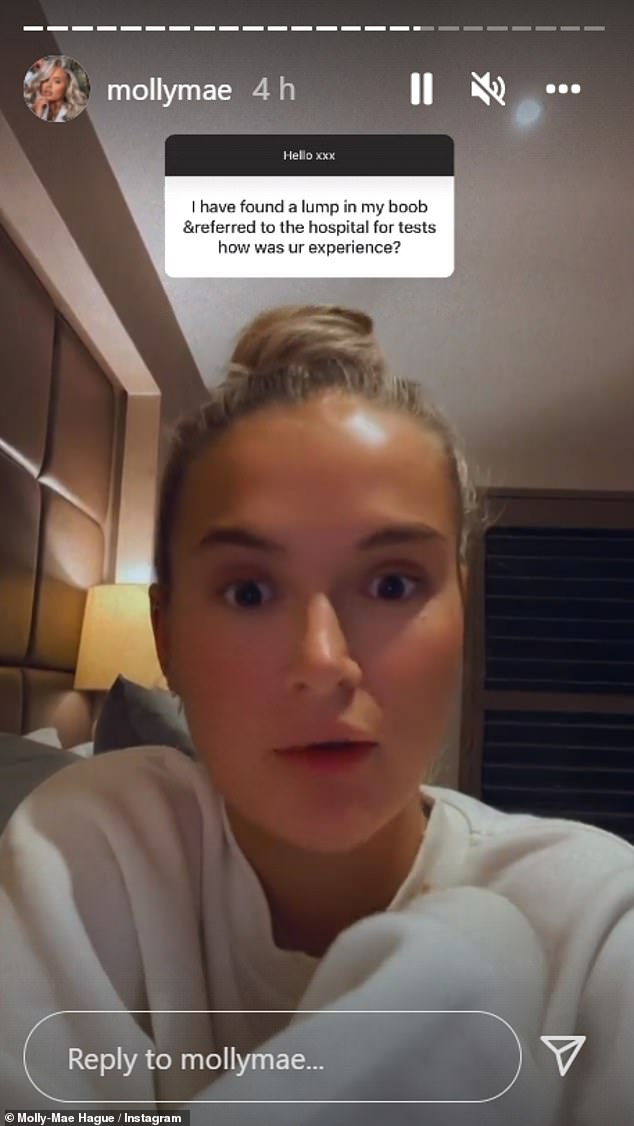 Candid: Molly-Mae Hague has discussed the moment she found a lump on her breast, saying it was the size of a ‘golf ball’

Molly-Mae said: ‘This is obviously a really serious one. I’m really sorry that you found a lump. I know it can be so scary. I was literally in bed when I found mine.

‘I was like lying in bed with Tommy [Fury] and sort of lying really far back and sort of went like that [cupped side] on my boob and I literally felt it.

‘Honestly, I think when you find a lump you sort of think, “how have I not felt this before?”

‘It must have come around so quickly, how have I not noticed it before? Mine was literally, it felt like a literal golf ball. It felt huge. 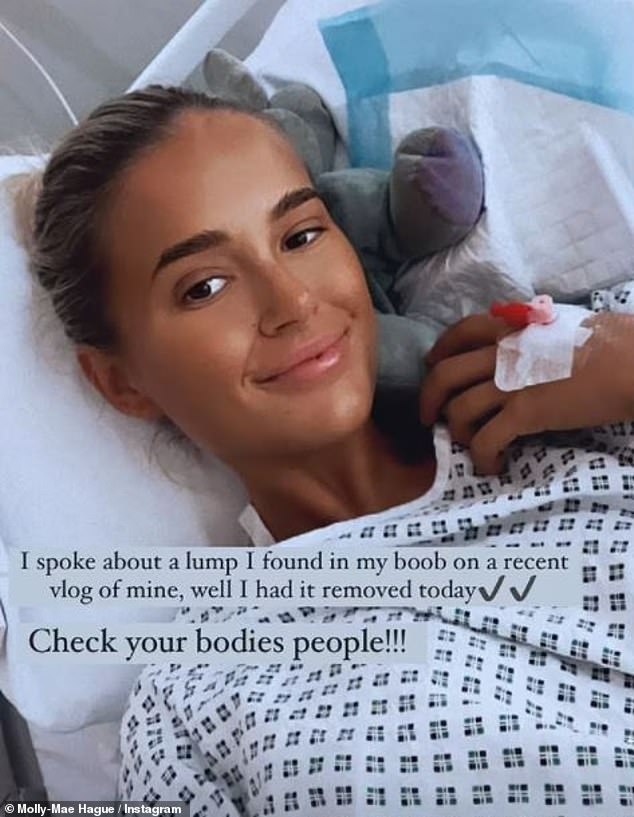 Health: The former Love Island star, 22, previously had surgery in September to remove a lump after a biopsy revealed it had gown in size

‘Actually at first they recommended that I didn’t have the lump removed at all. They said it was something called a fibroadenoma and it’s benign and not serious, but I think that as a woman to have to just live with a huge lump in your boob, for me it just didn’t sit right.’

Molly-Mae said that she kept pushing to have the lump removed and captioned the clip: ‘Check your boobs!’

She said: ‘I think when you know something is not right with your body you just know and I didn’t want to just sit and wait for years to come for the lump to potentially turn into something sinister.’

It comes after Molly-Mae previously had surgery to remove the ‘beign’ lump in her breast and a separate mass in her finger. 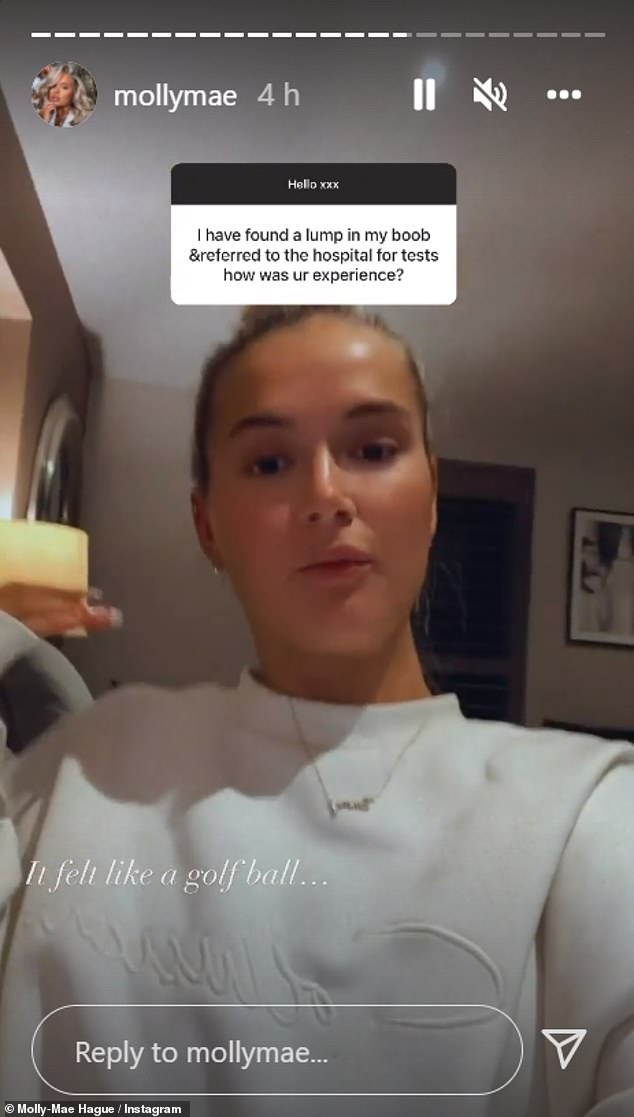 Discussion: Taking to her Instagram Stories on Monday, Molly-Mae told of her experience as she answered a fan who said she had also recently found a lump

The influencer shared pictures from her hospital bed in September as he revealed she had undergone the procedure.

Alongside the snap, she wrote: ‘I spoke about a lump I found in my boob on a recent vlog of mine, well I had it removed today. Check your bodies people!!’

Further updating her fans, Molly-Mae said: ‘Also had a lump removed from my finger that I’ve spoken about a few times too.’

‘Also having a canula put in my hand has always been without a doubt my BIGGEST fear… so that in itself today is a HUGE achievement for me.’ 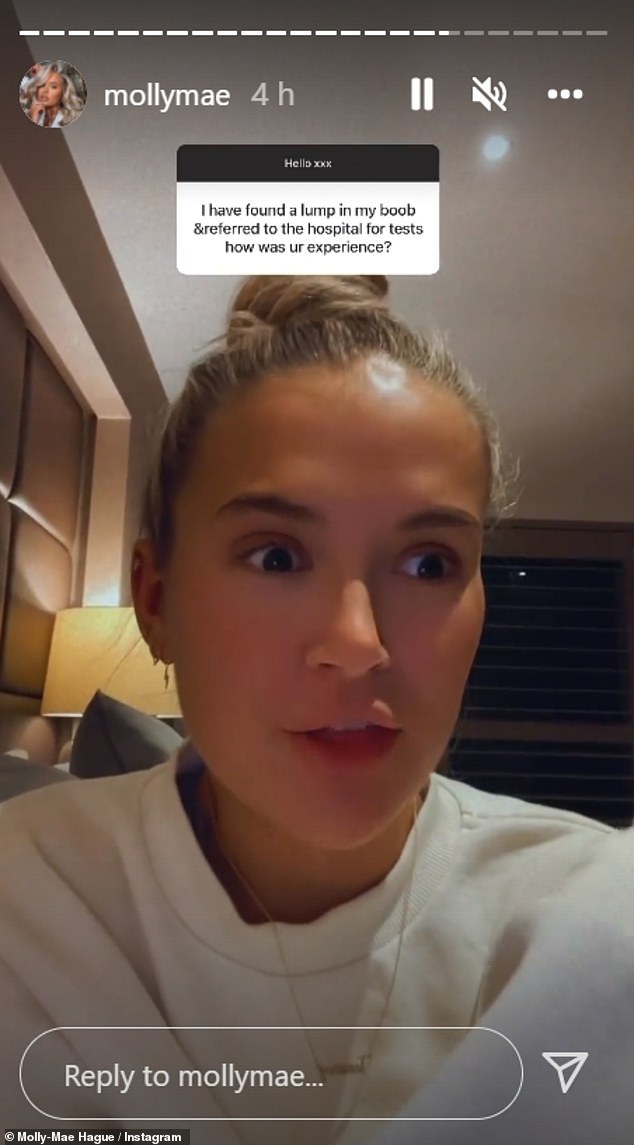 Molly-Mae said: ‘I think when you know something is not right with your body you just know and I didn’t want to just sit and wait for years to come for the lump to potentially turn into something sinister’

Molly-Mae previously said on her YouTube channel that she’d been referred for a biopsy after discovering a benign lump in her breast had grown, but reassured her followers that it’s ‘not serious.’

The star explained she previously had the lump checked by doctors, who reassured her that it was benign and non-harmful.

She told her fans: ‘I basically noticed a little lump in my boob, went to get it checked and it was completely fine, completely benign.

‘It’s a little thing called a fibroadenoma and it’s a normal thing to get at this age, small lumps can happen all the time it doesn’t mean they’re sinister.’ 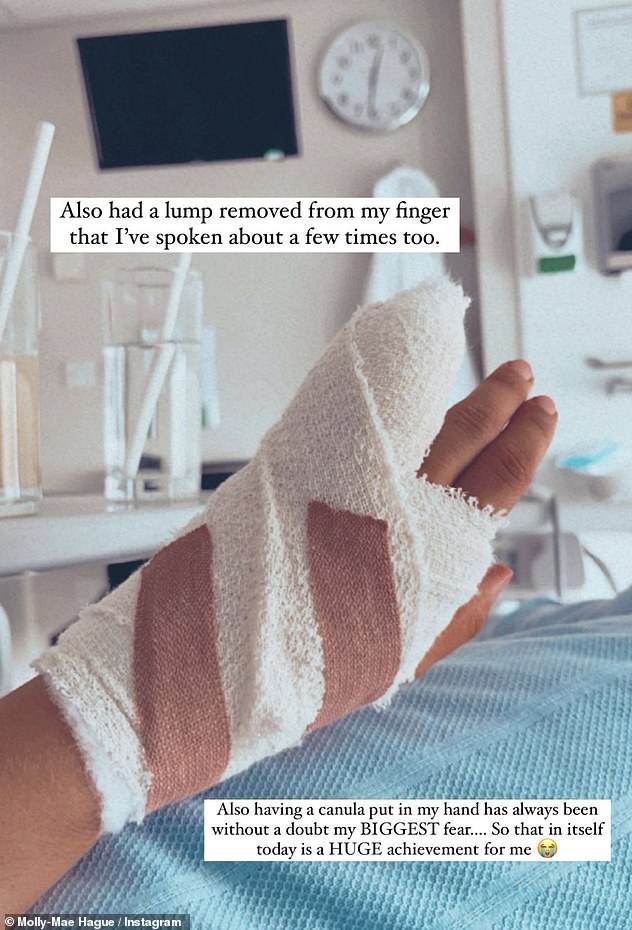 Surgery: It comes after Molly-Mae previously had surgery to remove a ‘beign’ lump in her breast and a separate mass in her finger

Molly-Mae then told fans she’d begun to notice the lump was growing as it became more noticeable on her clothes.

‘It was not very nice actually considering I’m afraid of needles, but I thought there’s not really a way around this.

‘I promise it’s nothing serious, I don’t want it to be a massive thing. I think it’s important that I share this with you guys.

‘It’s an important subject and we should all be checking our boobs and checking for lumps so we can do things like this.’ 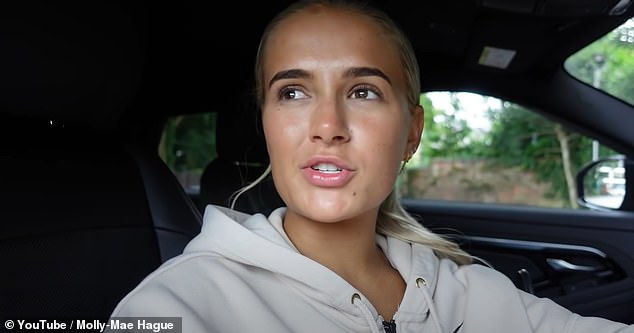 Struggles: Molly-Mae told fans that doctors had referred her for a biopsy after discovering a benign lump in her breast had grown

What is breast cancer?

Breast cancer develops from a cancerous cell which develops in the lining of a duct or lobule in one of the breasts.

When the breast cancer has spread into surrounding breast tissue it is called an ‘invasive’ breast cancer. Some people are diagnosed with ‘carcinoma in situ’, where no cancer cells have grown beyond the duct or lobule.

Most cases develop in women over the age of 50 but younger women are sometimes affected. Breast cancer can develop in men though this is rare.

Staging means how big the cancer is and whether it has spread. Stage 1 is the earliest stage and stage 4 means the cancer has spread to another part of the body.

The cancerous cells are graded from low, which means a slow growth, to high, which is fast growing. High grade cancers are more likely to come back after they have first been treated.

A cancerous tumour starts from one abnormal cell. The exact reason why a cell becomes cancerous is unclear. It is thought that something damages or alters certain genes in the cell. This makes the cell abnormal and multiply ‘out of control’.

Although breast cancer can develop for no apparent reason, there are some risk factors that can increase the chance of developing breast cancer, such as genetics.

What are the symptoms of breast cancer?

The usual first symptom is a painless lump in the breast, although most breast lumps are not cancerous and are fluid filled cysts, which are benign.

The first place that breast cancer usually spreads to is the lymph nodes in the armpit. If this occurs you will develop a swelling or lump in an armpit.

How is breast cancer diagnosed?

If you are confirmed to have breast cancer, further tests may be needed to assess if it has spread. For example, blood tests, an ultrasound scan of the liver or a chest x-ray.

How is breast cancer treated?

Treatment options which may be considered include surgery, chemotherapy, radiotherapy and hormone treatment. Often a combination of two or more of these treatments are used.

How successful is treatment?

The outlook is best in those who are diagnosed when the cancer is still small, and has not spread. Surgical removal of a tumour in an early stage may then give a good chance of cure.

The routine mammography offered to women between the ages of 50 and 70 mean more breast cancers are being diagnosed and treated at an early stage.