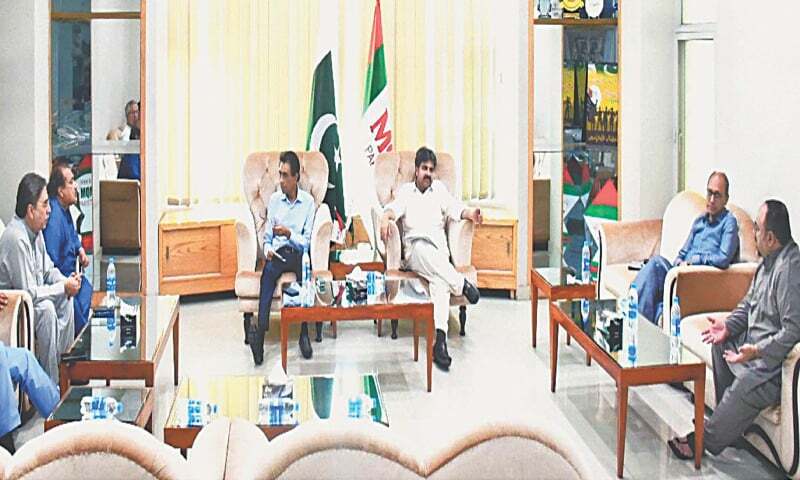 KARACHI: Pakistan Peoples Party (PPP) and Muttahida Qaumi Movement-Pakistan (MQM-P) are certain on the positive outcome of the coalition between the two parties as on Thursday they further inched forward on the “Charter of Rights” signed by them last month. They agreed to prepare the consensual draft and move it to the Sindh Assembly for final amendments to the new local government law while sketching out execution plan of other points of the accord that included establishment of a university in Hyderabad and a women varsity in the province.

The fresh resolve came at a meeting between the two sides when a two-member PPP delegation visited MQM-P’s temporary headquarter in Bahadurabad and held a detailed discussion.

The meeting lasted almost two hours which mainly discussed the amendment to the LG law and an empowered local body system for the province as mentioned in the last month’s “Charter of Rights”.

Progress in fresh talks as amendments to LG law, other demands top agenda

“After one last meeting, we would send the proposed amendment to the Sindh Assembly,” said Mr Jamil while talking to reporters after the meeting.

“We have also discussed issues of women university in the province and a university in Hyderabad. This meeting was nothing new as we have been in constant touch since the accord was signed last month and we are almost close to develop the consensus on all the relevant issues.”

Appreciating MQM-P’s decision which was “made in larger interest of the country”, PPP lawmaker and Sindh Local Government Minister Nasir Hussain Shah said: “We are confident about the positive outcome of all this exercise,” and added they were in the process of finalising things in line with the demand of the MQM-P and other parties about the local government law.

“The PPP chairman Bilawal Bhutto-Zardari and president Asif Zardari have issued very clear directives that we have to move forward in larger interest of our country, this province and its people,” the provincial minister added.

In a major success after days-long exercise, anxious wait by workers and picking every so-called ‘card’ with due care, MQM-P has finally succeeded in striking a deal with the ruling PPP on almost all of its years-old demands which were under a guarantee offered from the leadership of the opposition alliance. The demands of the MQM-P agreed upon under the deal range from municipal government structure to future power sharing formula and recruitment policy in Sindh to local policing system.

Since the agreement was signed in the first week of April 2022, the two sides are constantly engaging each other and now it seems that both have almost come to a consensual term for formal execution of the proposal mentioned in the accord.

The Cannes Film Festival 2022 has arrived, and true to form, it finds cinema’s biggest stars traveling from near and far for film...
Read more

A public hearing into a sweeping development plan that could reshape Vancouver’s skyline got underway Wednesday, with more than 200 people signed up...
Read more

The Cannes Film Festival 2022 has arrived, and true to form, it finds cinema’s biggest stars traveling from near and far for film...
Read more

A public hearing into a sweeping development plan that could reshape Vancouver’s skyline got underway Wednesday, with more than 200 people signed up...
Read more