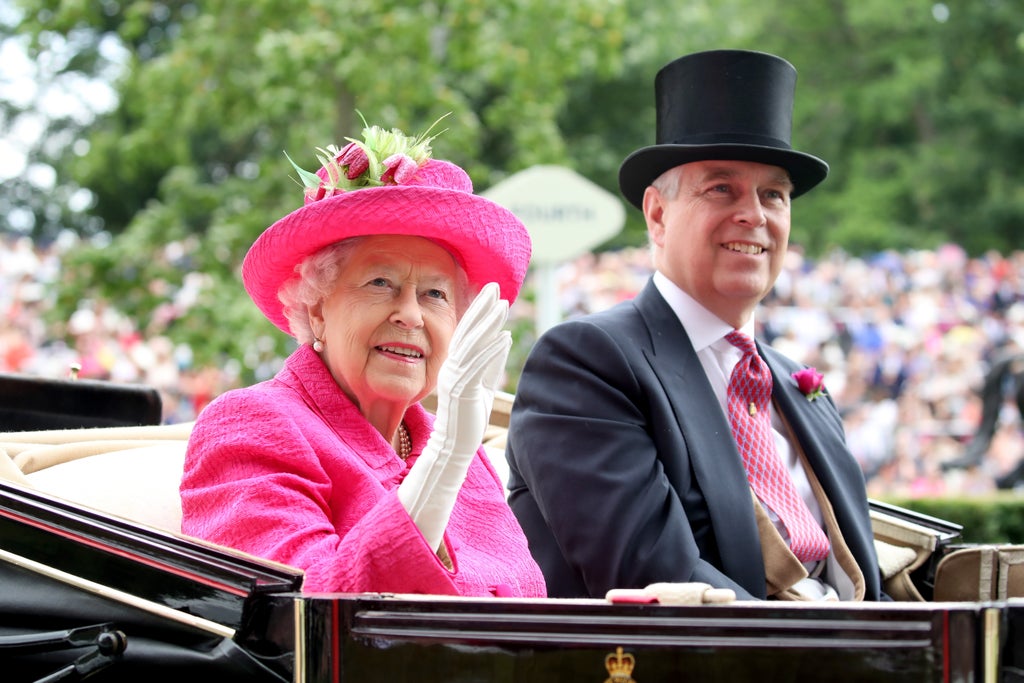 Thirty years ago, Queen Elizabeth delivered a speech that has gone down in history.

Speaking in November 1992 at the Guildhall in London, the address was to formally mark the 40th anniversary of her ascension to the throne.

Under usual circumstances it might have been an occasion for the Queen to reflect on the moment, what she believed she had accomplished so far as Britain’s unelected head of state, and how she foresaw the years ahead.

Yet they were not happy times for the Queen, or her children. In the preceding 12 months, three of them had separated from their partners.

Her eldest son Charles, split from Diana Spencer, though their divorce would not be formalised until 1996. Princess Anne, the Queen’s second child and only daughter, divorced from her husband Captain Mark Phillips, in 1992, and the palace announced Prince Andrew was separating from Sarah Ferguson.

Virginia Giuffre: ‘There’s only one of us telling the truth, and I know that’s me’

Similarly, Andrew would not divorce until 1996, but 1992 also saw the palace plunged into fresh controversy when the Daily Mirror published compromising photographs of Ferguson’s toes being caressed by a Texan millionaire John Bryan, at a luxury villa in St Tropez.

On top of that, there was a devastating fire at Windsor Castle, that destroyed more than 115 rooms.

“1992 is not a year on which I shall look back with undiluted pleasure,” the Queen said with some understatement.

“In the words of one of my more sympathetic correspondents, it has turned out to be an ‘annus horribilis’.”

Some giggled at the Queens’s choice of Latin, which translates as a year of disaster. Yet, it was clear she found nothing funny about any of it.

As it was, worse was to come for the royals and their public image following the death of Diana in a car crash in Paris in August 1997, an event to which the Queen was accused of responding coldly. Some were ready to write off the royal family.

With some irony, it was Diana’s children, Prince William and Prince Harry, that would in time give the monarchy a new lease of life. Their marriages, to Kate Middleton, and Meghan Markle, respectively, were seen to inject new energy into a fusty institution.

That being said, while Middleton, formally the Duchess of Cambridge, remains a tabloid favourite, Markle, technically still the Duchess of Sussex, has faced criticism and hostility, some of it she alleges of a racist nature.

While they’ve kept their titles, Harry and Meghan have now given up their royal duties and live in California where they’re friends and neighbours with Oprah Winfrey.

Yet, all of these travails may appear as pale as freshly fallen snow in comparison to the challenges now facing Prince Andrew, 61, long said to have been the Queens’s favourite.

This week a judge ruled that a civil proceeding against the queen’s third child may proceed.

Virginia Giuffre is suing the prince, claiming he sexually abused her in 2001, when she was aged just 17 and part of the circle of young women offered to his friends by Jeffrey Epstein, the disgraced financier who took his life in jail in 2019 while on remand for sex trafficking charges.

Giuffre is suing Andrew for battery and infliction of emotional distress. He has denied the allegations and claimed a 2009 non-prosecution agreement between Epstein and Giuffre in Florida should absolve him of liability. He accuses her of trying to get money out of him.

On Wednesday, as the judge’s decision reverberated back and forth across the Atlantic and even as far as Australia where Giuffre lives, the questions for the prince mounted up.

Will he have to go to the US to attend any hearing? Will he be required to give evidence? Would Buckingham Palace seek to step in and offer a settlement?

Andrew, once nicknamed “Randy Andy”, has long been a figure of some controversy within the royal establishment. As far back as 2011, he was stripped of his role as unofficial trade envoy for Britain, because of his continued friendship with Epstein, who in 2008 was jailed for soliciting a minor for prostitution.

In 2019, it was announced he was giving up his royal duties following an interview he gave to the BBC in which the the prince said he “still” did not regret the friendships with Epstein or Ghislaine Maxwell.

One comment that was widely picked up – and mocked – was his dismissal of Giuffre’s claims because she had said he had been profusely sweating. He claimed that a medical condition – which he attributed to being shot at during the Falklands War – made it “almost impossible for me to sweat”.

Nobody knows what precisely happens next. On Wednesday, Buckingham Palace refused to comment on legal matters, while Giuffre’s lawyer said she was “pleased”.

What is certain is that this is an unprecedented moment for the British monarchy – the prospect that one of its senior members could be forced to defend themselves in court of sexually abusing a minor. Queen Elizabeth is now aged 95; what does she make of all this?

In 1992, she had this to say of her problems: “I sometimes wonder how future generations will judge the events of this tumultuous year. I dare say that history will take a slightly more moderate view than that of some contemporary commentators.”

Thirty years on, does she feel so certain?

Prince Andrew has been stripped of his titles. What next for the Queen’s favourite son?

Prince Andrew has been stripped of his titles. What next for the Queen’s favourite son?

What fascinates Dolce and Gabbana today is the spontaneous sense of free style new generations are embracing with the candor that comes from...
קרא עוד

Former Labour minister and City grandee, Lord Paul Myners has passed away at the age of 73, his family have confirmed. In a...
קרא עוד

What fascinates Dolce and Gabbana today is the spontaneous sense of free style new generations are embracing with the candor that comes from...
קרא עוד

Former Labour minister and City grandee, Lord Paul Myners has passed away at the age of 73, his family have confirmed. In a...
קרא עוד