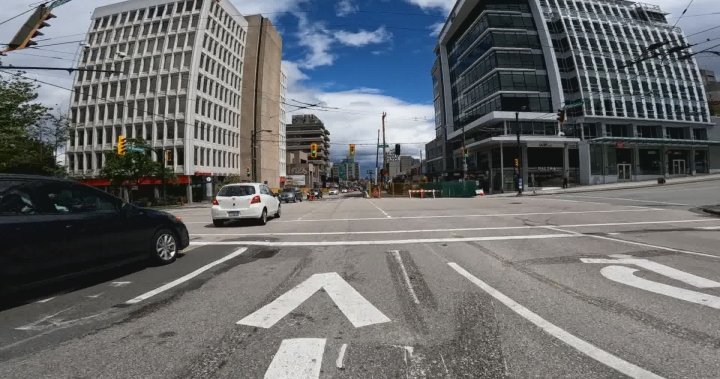 A public hearing into a sweeping development plan that could reshape Vancouver’s skyline got underway Wednesday, with more than 200 people signed up to comment on the proposed Broadway Plan.

The plan is meant to guide development along the city’s Broadway corridor over the next 30 years and take advantage of the completion of the new $2.8 billion Broadway subway.

“The plan is a generational city-building opportunity for positive change on Vancouver’s most pressing issues,” said Theresa O’Donnell, the city’s director of planning, as staff presented the plan to council.

The proposal would allow redevelopment within nearly 500 city blocks in an area already considered the province’s second largest employment corridor, and home to about a quarter of the city’s existing purpose-built rentals.

It would allow towers of up to 40 storeys near transit stations and between 20 to 30 storeys in numerous so-called centre/shoulder areas.

The city is aiming for 65 per cent of construction to be rental, with a quarter of that at below-market rates.

The plan has sparked fierce public debate, some of which was on display at council Wednesday.

“People desperate for affordable housing are being hoodwinked into thinking all these towers will provide what they need,” speaker Gareth Sirotnik told council.

“Tower clusters do just the opposite, they raise rents all around, and for smaller more unaffordable spaces that already exist in very large numbers in all the shoulder areas of the Broadway corridor.”

Architect Brian Palmquist took issue with the “climate and sustainability disaster that is concrete high-rise,” arguing that his own modelling showed “the Broadway plan density can be achieved without much high-rise at all.”

“We can be way more ambitious about where we build what type of housing. I have a lot of friends who have moved out of Vancouver to start families and as a renter with a baby on the way I’m concerned myself.”

“The context everyone needs to remember is that by the time this plan is over I will be 64 years old and my two year old who is still in diapers will be my age,” he said.

For his part, Vancouver Mayor Kennedy Stewart has promised the plan will come with “the strongest renter protections in Canada.”

5:28
Should the Broadway corridor become a high-density zone?

Should the Broadway corridor become a high-density zone?

Anyone displaced by redevelopment, the mayor pledged, will get help finding another unit with the right to return to a new building at their original rent or better.

“We’ve got to protect renters that are here already. I think this plan does this,” Stewart told Global News Wednesday.

“We also have to build tens of thousands of new units for those that are seeking homes. This is the second largest employment corridor in the province, it’s so important, and we need a place for workers to live.”

Wednesday’s meeting may mark the first of several sittings to address the plan. By 8 p.m., council had heard from fewer than a quarter of registered speakers. With just one day a week set aside to address the plan, it means deliberations could potentially stretch into June before council votes on whether to approve it.