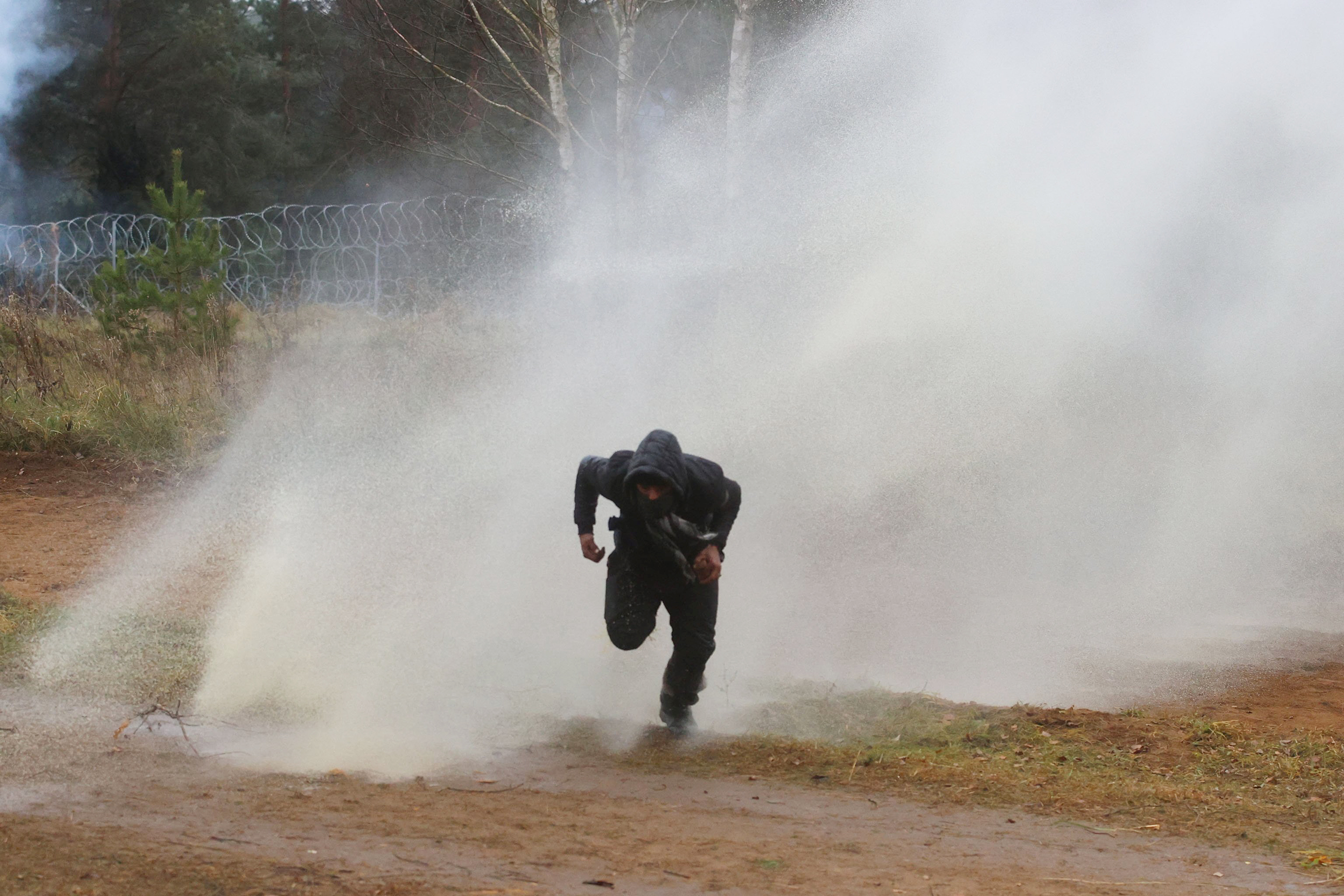 The United States and its allies are stepping up pressure on Russian President Vladimir Putin over two crises on the fringes of Europe that they blame the Kremlin for inflaming.

In the freezing forests and swamplands of the Poland-Belarus border, unrest flared Tuesday after Polish police fired tear gas and water cannons at some of the thousands of migrants stranded there.

Meanwhile, Russia is massing troops on its border with Ukraine, prompting fears of a repeat of 2014 when Moscow invaded the Ukrainian peninsula of Crimea.

Washington and the Europeans accuse the Kremlin of complicity in both issues.

They say Belarus, Putin’s only ally in Europe, is deliberately pushing Middle East migrants toward the border with Poland on the false promise of easy access into the European Union. Belarus has made little effort to stop the migrants, fomenting a tense standoff with Polish police that escalated Tuesday.

Secretary of State Antony Blinken said in a tweet Sunday that the manufactured migrant crisis was a deliberate attempt “to threaten security, sow division, and distract from Russia’s activities on the border with Ukraine.”

French President Emmanuel Macron spoke with Putin by phone Monday. Afterward one of his advisers said that NATO would be prepared to defend the sovereignty of Ukraine if necessary, Reuters reported. Ukraine has campaigned for NATO membership but has been unsuccessful so far.

These allegations have been repeatedly denied by Putin. Kremlin spokesman Dmitry Peskov said it was “wrong” that the Belarus crisis was meant to distract from Russian troop movements. Putin has instead pointed to what he says are escalatory U.S. military maneuvers in the Black Sea.

Belarusian President Alexander Lukashenko — an uneasy ally of Putin’s, and often called the last dictator in Europe — has also held a flurry of calls with Western leaders. On Monday, he spoke with German Chancellor Angela Merkel about “ways and prospects of resolving” the migrant crisis, and possible humanitarian aid.

“These problems are not going away. The West and Ukraine have to remain vigilant because this is a war of attrition.”

It was Lukashenko’s first known contact with a Western leader since his disputed election victory last year sparked mass protests and a brutal crackdown by his security services. Dissident activists accuse Russia of aiding the crackdown, which made Belarus even more of a pariah among democracies and deepened its complicated relationship with Moscow.

Some experts say Russia is wary of becoming embroiled in another costly foreign escapade like the ongoing war in Ukraine. Still, Russia last week sent two nuclear-capable bombers over Belarus, as well as paratroopers for joint exercises with Belarusian troops near the Polish border.

It’s not clear whether Russia is directly involved in the Belarusian border crisis, according to Orysia Lutsevych, head of the Ukraine Forum at the London think tank Chatham House. But it follows “a pattern of escalation by Russia on its western borders,” she said.

“I wouldn’t be surprised if Russian intelligence is involved in this kind of hybrid operation,” Lutsevych added.

In response to what it says is a confected crisis, the E.U. plans to expand sanctions against “everyone who participates in smuggling migrants to this country,” including Belarusian airlines and travel agents, the E.U.’s foreign policy chief Josep Borrell said Monday. The E.U. has already hit Belarus with four rounds of sanctions over the post-election crackdown.

Meanwhile, on Russia’s border with Ukraine to the south, Moscow has mobilized some 100,000 troops, according to Ukrainian government estimates. This is not the first buildup this year, with similar numbers sending alarm through Western capitals in the spring.

Russia and Ukraine have been locked in conflict since 2014, when Russia annexed Crimea and began supporting separatists in the country’s east. That war has rumbled on ever since, costing some 14,000 lives despite a series of shaky ceasefires.

NATO Secretary-General Jens Stoltenberg told a news conference Monday that the “significant, large Russian military buildup” was “unusual” and noted that “Russia has been willing to use these types of military capabilities before to conduct aggressive actions against Ukraine.”

Some experts believe Putin is attempting to use these threats to gain extra leverage in the stalled Ukraine peace talks — and to warn the West that backing Ukraine comes with a cost.

Part of the problem is that the U.S. and Europe have not been strong enough in condemning Russian aggression in Ukraine, and Belarusian repression of opposition activists, Lutsevych at Chatham House said.

“Putin believes that the West is not serious about the region: He believes it’s just lip service being paid to Ukraine and the Belarusian opposition,” Lutsevych said. “These problems are not going away. The West and Ukraine have to remain vigilant because this is a war of attrition.”