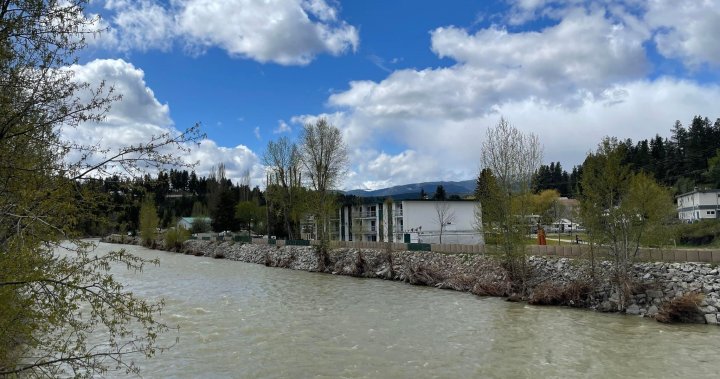 Residents in the Similkameen region are being warned that there is an increased risk of flooding in the area.

The Town of Princeton, B.C., is still recovering from the atmospheric river event that happened in November, but Princeton’s mayor said they are prepared for spring freshet.

“It’s not urgent but people should be prepared. We still have over 100 per cent snowpack in our watersheds and we are supposed to have a warming trend coming up this week. With that comes warmer evenings and the melt doesn’t slow as fast and there is a potential for higher waters,” said Princeton Mayor Spencer Coyne.

“I am concerned but I wouldn’t say I am worried. I feel like we left the appropriate defences in place coming into spring freshet, so we do have an extra three feet on our diking system which will help us if the river does come up.”

Increased risk of flooding in the Similkameen region, says RDOS

The Regional District of Okanagan-Similkameen (RDOS) says they are monitoring water levels with the River Forecast Centre but due to significant erosion along the Tulameen River, flooding is possible at lower levels.

“We have had a lot of [precipitation] here over the weeks as well as the erosion from the atmospheric river. All of the damages from the orphaned dykes within the area, the impacted homes and structures and the unknown of the topography of the landscape — all of that stuff is going to play into the RDOS and the province having a risk level scale,” said RDOS Emergency Services manager Sean Vaisler.

During last November’s flood area rivers also swept up debris which the RDOS says is concerning. The Regional District has been working to remove some of the debris, and pictures sent to Global News show several logs and even a car that have been pulled from the river already.

“We are watching that so that if the river does come up and if it does grab onto those logs and it does bring them down river we will be watching our bridges and our vital infrastructure to make sure they won’t be put in jeopardy,” said Coyne.

Meanwhile, residents are encouraged to prepare for potential flooding and make an emergency plan.

“It is very important to have a plan, understand the hazards, and have a kit. Have enough to sustain you for 72-hours or a week,” said Vaisler.

Property owners in low-lying areas are also being advised to consider sandbagging their property.

“We have several [sandbag centres] open in the Regional District and if you go over to our website, we have a nice map over there which shows you where all the sandbagging centres are. Sand and sandbags are completely free for homeowners,” said Vaisler.

“I would suggest that if you want to prepare your property, this is the time to do it. You don’t want to do it when … the floodwaters are on your doorstep.”

The Regional District is also reminding residents to stay away from hazards including riverbanks and parts of the KVR trail.