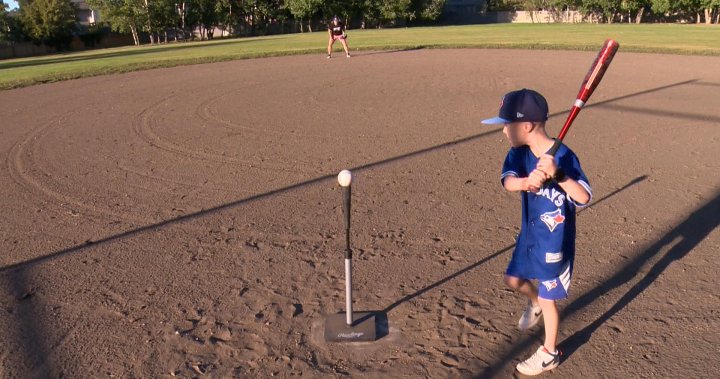 Like any other Saskatchewan kid, Rocky Trainor loves getting outside and playing sports, but not every kid has gone through open heart surgery. Or thrown the first pitch at a Toronto Blue Jays game.

Rocky was born with hypoplastic left heart syndrome, which means he only has half a heart. It required three operations to recreate his heart before the age of four. Now the seven-year-old is able to play all kinds of sports.

His love of sport has taken him all the way to the big leagues. After applying to the Make a Wish Foundation, Rocky was taken to Toronto where he got to throw the first pitch and watch the game.

“It was kind of quiet until he got out there and raising his arms. The crowd just erupted…. it was really cool to see the power a seven-year-old can have over a crowd,” Rocky’s father Scott Trainor said.

His parents say the way he has been able to continue playing sports amazes them every day.

“It’s never been a horrible experience because it’s family time,” said Rocky’s mother Stacey. “It’s where he pulls through. He fights through it. (After) all the surgeries, we have not had a bad experience.

While Rocky’s relationship with his parents is special, he also has a little brother who he has introduced many sports to.

Five-year-old Russell said while he likes to play all the sports with his brother, there is one he enjoys more than others.

“My brother likes to play football with me and it’s very cool,” Russell said.

Rocky’s favourite sport has been baseball, but time with his brother may have changed that, as he now flips between football and baseball as his favourite.

The family said through it all, the hospital staff have always been there to help Rocky get to his shining moment at centre field.

“It’s because of the amazing surgeons in Edmonton who did his heart surgery and the cardiologists here in Saskatoon,” Scott said. “We always had a positive attitude and knew it was all going to turn out, and it has.”