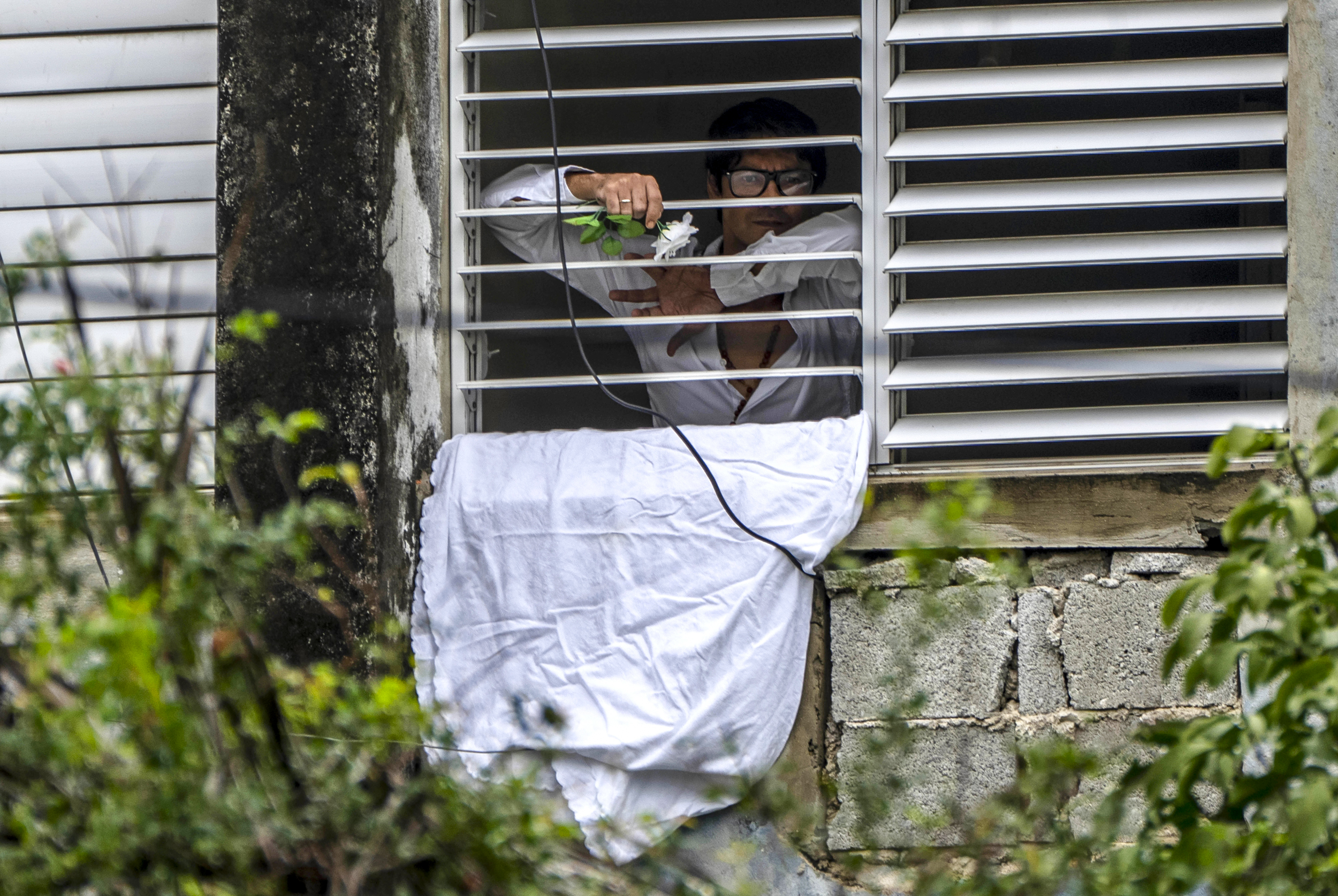 A standoff began Sunday between Cuba’s communist-run government and young activists who have been calling for a peaceful march for change Monday.

State security since early Sunday has surrounded the home of Yunior García, an artist who has emerged as one of the country’s leading activists and called for islandwide protests Monday. Foreign credentialed media were kept several hundred feet away.

García, 39, an artist and playwright, had said he would march alone, dressed in white and holding a white rose, at 3 p.m. Sunday to represent those who wouldn’t be able to Monday, but he was prevented from doing so. Instead, he showed the white rose, a symbol of peace, out his window.

Outside García’s building, pro-government Cubans gathered since the morning shouting pro-Fidel Castro chants with music and dancing, scenes that were tweeted by activists. They also hung a giant Cuban flag over part of the building García lives in, partly blocking his window. He put a sign outside his house that said, “Mi casa está bloqueada” (“my house is blocked”).

In Miami, home to the largest concentration of Cubans who have fled the island, a car caravan and march were held Sunday in support of those on the island. Solidarity rallies are planned around the world Monday.

García said in a Facebook Live post Sunday that it is his “human and constitutional right to walk as a free citizen on a street, carrying a white rose,” adding, “But apparently not even that are they willing to allow.”

“We are living very ugly days in Cuba. Unfortunately, we are returning to the worst times,” said García, adding that from his window he saw credentialed journalists being expelled outside his building. “In the last few years we have seen how the violence increases, how the language of hate increases, how the discrimination increases and how that ideological apartheid increases.”

He said Cuba is a “tyranny” and called on Cubans to civically and peacefully put aside the hate and learn to conquer a country that really “belongs to all of us without excluding anyone.”

Some Cubans heeded García’s call to clap at 3 p.m. “for us” and “for the people of Cuba,” and several of them shared the experience on social media.

García launched a Facebook group for political debate called Archipelago after historic anti-government protests on July 11. It has named the event Monday the “Civic March for Change.”

State-run television has dedicated programming to García in recent weeks, accusing him of being financed by the U.S. The government, which banned Monday’s march, has incessantly accused the U.S. of trying to destabilize the country.

The State Department called on the government in a statement Sunday to respect Cubans’ rights and urged it to “reject violence, and instead, embrace this historic opportunity to listen to the voices of their people.”

The protests have put Cuba’s government on high alert.

A Cuban columnist for The Washington Post, Abraham Jiménez, tweeted Sunday that state security agents told him he was under house arrest as he tried to take out his garbage.

Independent journalists throughout the island also reported being under house arrest Monday.

The Committee to Protect Journalists said it is following the situation involving independent media and demanded respect for journalists that “resists censorship and harassment.”

Carmen Sesin is a reporter based in Miami.