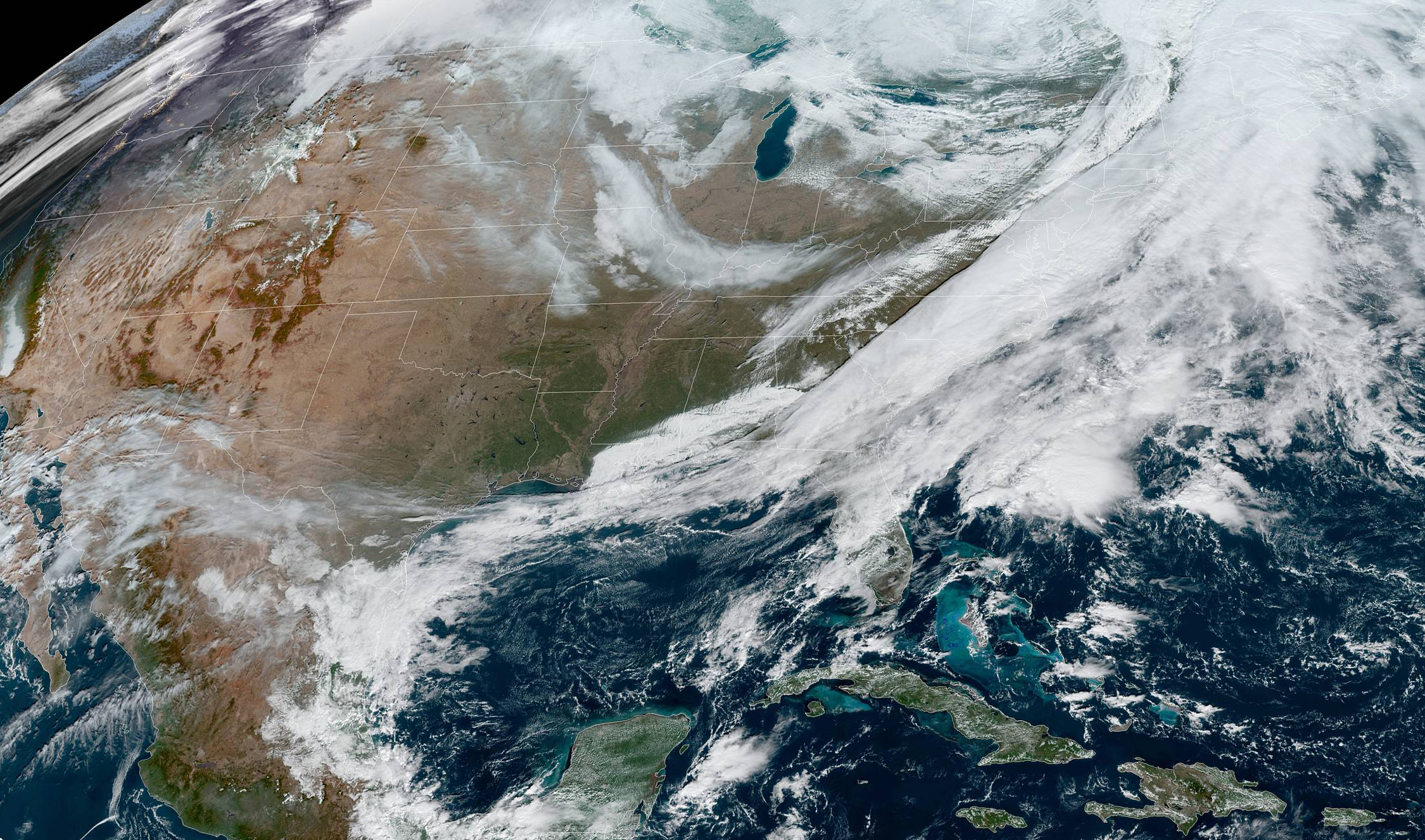 A cold front sliced through the Mid-Atlantic and the Northeast on Monday morning, bringing light showers and some gusty winds to parts of the Interstate 95 corridor.

It was a fast-moving system, with all rain projected to be off the Atlantic coast by early afternoon.

Behind the exiting storm system, lake effect snow was still cranking, and it was expected to produce snow through Tuesday. By the time the snow ends, more than 6 inches is likely in some spots, with higher amounts downwind of lakes Erie and Ontario.

The big story will be the sharply colder temperatures and gusty winds behind the cold front. The Midwest and the Great Lakes were already bitterly cold Monday morning, with temperatures in the teens and wind chills in the single digits in cities like Minneapolis and Chicago.

And the cold air was spilling south and east.

For the East Coast, the warmest time of the day Monday was the morning, with temperatures expected to drop throughout the afternoon. Winds were also forecast to strengthen, leading to biting wind chills that will last through the day Tuesday.

Chicago was looking at a high in the mid-30s on Monday. Overnight lows were expected to dip into the 20s; combined with wind gusts of up to 20 to 30 mph, that would lead to wind chills in the single digits Tuesday morning.

But what a difference a day makes.

By Tuesday morning, New York is forecast to experience temperatures right around freezing, with wind chills in the 20s.

The good news is that after Tuesday, a warming trend is forecast through Thanksgiving Day. In fact, high temperatures are forecast to soar back into the 50s on Thursday from Cleveland and Buffalo to New York City and Boston. Washington is forecast to make a run for 60 degrees.

And in even better weather news, Wednesday, historically the busiest travel day of the week, is forecast to be fairly quiet across the entire lower 48 states.

Except for some light showers in parts of the Central Plains and light snow in the Northern Plains and the Rockies, the country looks dry.

Denver may experience some light air delays due to snow showers in the area.

By Thursday, the next storm system is forecast to head into the Pacific Northwest with the chance of rain in coastal areas and lower elevations and snow in parts of the Cascades.

Showers and storms are also forecast to affect parts of the Southern Plains, the Mississippi Valley and the Gulf Coast, including cities like Houston and Memphis, Tennessee.

Those traveling along I-10, I-35 or I-40 in those regions could experience some slick roadways.

Finally, for those tuning in to the Macy’s Thanksgiving Day Parade, the forecast is about as good as it gets. Dry skies, temperatures in the 40s and winds less than 10 mph will mean the balloons should be able to fly high.

Kathryn Prociv is a senior meteorologist and producer for NBC News.