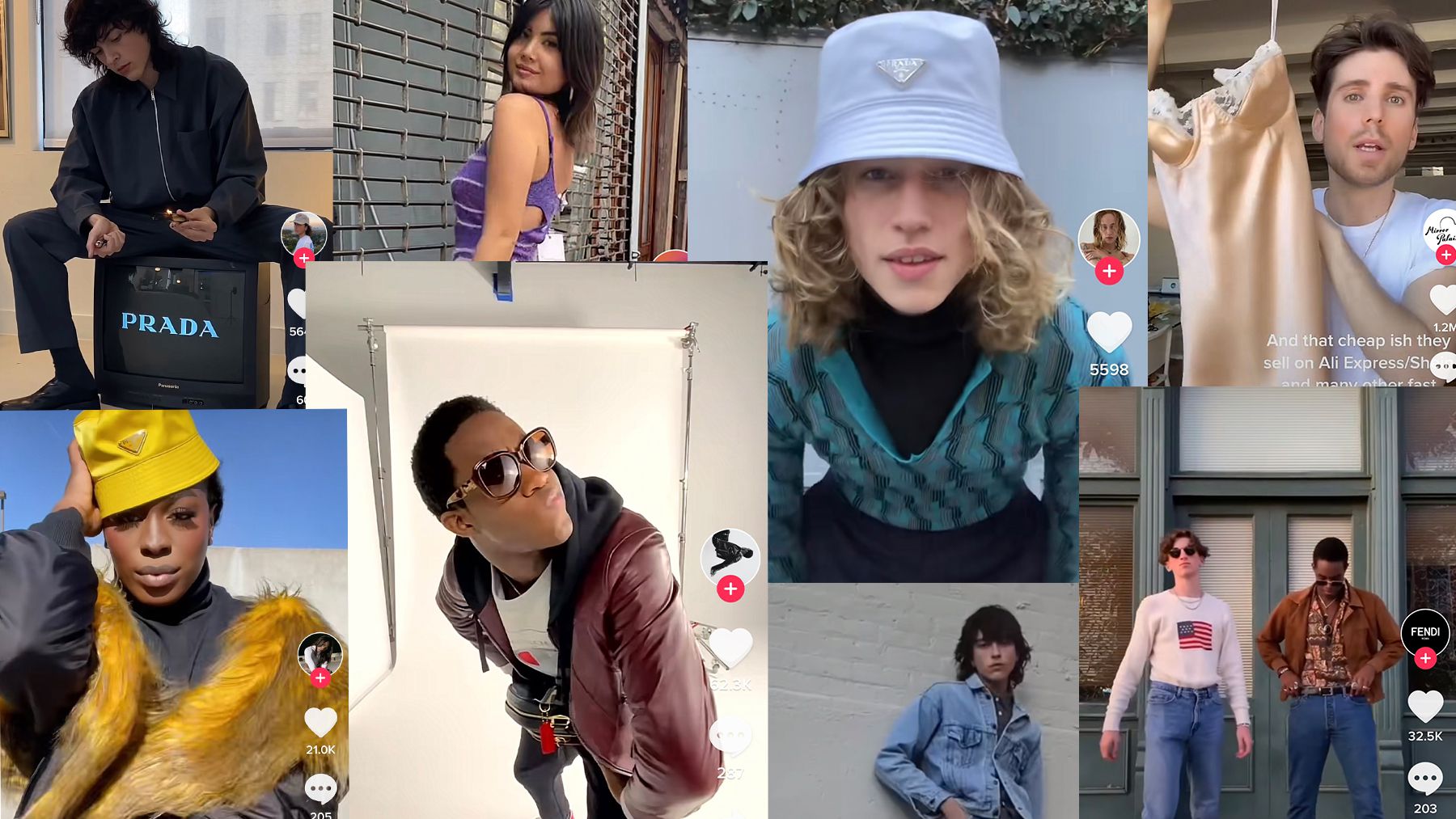 Lirika Matoshi’s strawberry dress went viral in the summer of 2020, part of the Cottage Core phenomenon sweeping TikTok at the time. But fame proved fleeting: by the time fast fashion dupes began popping up online, consumers were already moving on.

The designer credits the dress for making it possible for her brand to expand, and providing financial stability. But she isn’t counting on another instant hit.

“The viral moment was not something we expected, it just happened,” a spokesperson for the brand said. “Since then, everyone had expectations for us to do something similar, but our aim is to focus on the impact we have as a brand in the community and the fashion industry, while growing at the same time.”

The fashion industry has figured out how to catch Gen-Z’s attention. But keeping it for more than a few days — or hours — is proving to be a bigger challenge. Many young consumers interact with brands the way they interact with content online: love it, then forget it. They’re brand enthusiastic, but not brand loyal.

“The TikTok trend cycle is a double-edged sword for brands,” said Biz Sherbet, culture specialist at London-based next-gen creative agency and consultancy The Digital Fairy. “It can catapult brands to fame, but it can also contract a brand’s period of relevance.”

To grab Gen-Z’s attention for longer than the time it takes to swipe to the next video, brands first need to think like Gen-Z. That means crafting a distinct voice on social media, rather than trying to ride each new viral trend. It often also means handing control over to creators who know how to pitch their audience without making their content feel like an ad.

The Downside of Going Viral

Tyler Mazaheri, a creator known for their genderbending fashion style who has partnered with Levi’s and Calvin Klein Jeans, said the first mistake many brands make is to focus on going viral in the first place.

When a brand or creator goes viral, they become associated with a specific type of content or product. Mazaheri argues this can trap them in a cycle where they feel they must keep selling what won them attention in the first place, with diminishing returns.

Viral garments also become fodder for memes, which in the endlessly self-referential world of TikTok can quickly come to define a brand.

Consider House of Sunny’s Hockney dress. The item went viral as part of a TikTok microtrend, dubbed “avant basic” by the editor and consultant Emma Hope Allwood, where creators wear funky but not particularly unique patterns and colour combinations. A House of Sunny video at the peak of the trend in December 2020 logged over 1.1 million views, and several others reached six digits.

But as people moved on, House of Sunny appeared less frequently in users’ feeds. A few months later, House of Sunny went viral again — when a TikToker spotted a dupe of the dress in a charity shop. Today, the brand’s videos rarely top 5,000 views.

“Because it [the dress] was featured so heavily on peoples’ feeds, people quickly became tired of it, causing the dress to lose its status as an ‘It’ item,” said Sherbet.

Mazaheri said for their accounts, they try to create content that’s authentic to their work as a queer creative, whether that means partnering with a brand, creating community playlists, or posting outfits or favourite looks from the latest runway shows.

This slow burn approach allows them to curate a recognisable persona across both TikTok and Instagram. Take one of their most watched videos from last year, which consists of Mazaheri showing a Halloween costume as Dr. Frank-N-Furter from The Rocky Horror Picture Show in front of a mirror. The video went viral, and in its simplicity lay Mazaheri’s approach to TikTok. Whether it’s outfit videos, quick-cut vlogs, or moody clips, their aesthetic is consistent. So whichever video does go viral — an outcome the creator can rarely control — they all fall under the same brand of content.

Mazaheri takes a similar approach when partnering with brands such as Levi’s, Calvin Klein Jeans and Gucci Beauty. They pick brands that demonstrate commitment to shared values; a limited-edition “green” product or a once-a-year Pride collection won’t make the cut.

“More than anything, I prioritise a brand’s consistency first and foremost in determining their authenticity,” Mazaheri said. “It’s easy to tell when a brand is just trying to cash in on trendy buzzwords through a pocket-grab campaign. Consistency and continuity throughout a brand’s practices goes miles in winning over consumers’ trust and loyalty. What you claim to be of value to you today, better be of value to you tomorrow.”

Likewise, companies should work with creators they can trust to take the lead in promoting their brand.

Kaye’s content for Fendi consisted of a video series around words starting with the letter F, in which he appeared wearing different Fendi outfits. Some included short clips of his friends and life, others only featured Kaye. Meanwhile on his own account, Kaye featured Fendi products in less-elaborate videos. Both styles proved wildly popular: In one video for his own account, which currently stands at 3.5 million views, Kaye styled gifts from the brand. He then featured three Fendi items in a video with 4.3 million views for a popular series where he styles one very expensive outfit and an inexpensive one.

Brands don’t necessarily need help from a creator to find an audience, if they can create a consistent persona of their own.

Marcelo Gaia, designer of New York City-based brand Mirror Palais, uses TikTok to show the brand’s production process and showcase products with a candid, user-generated feel. One video features a fitting and clips of one of their dresses against images of another brand’s knock-off. In the next post, Gaia answers a question from the comments, explaining why it’s hard to put a zipper on a bias cut dress.

The designer uses the brand’s TikTok to tackle concepts like fast fashion “dupes” and garment quality, which speak to themes like sustainability that are popular with Gen-Zers.

“I personally use TikTok as an educational platform as much as I do for entertainment, and I felt the most natural approach would be to do a mix of the two,” Gaia said. He added that he tries to get straight to the point quickly “as the attention span for anyone who is endlessly scrolling can be limited.”

“I approach content creation with every video being potentially someone’s first introduction to me or the brand,” he said.

A brand’s online persona is more important than ever as Gen-Z is constantly hopping from one trend to the next, or mixing them together. This has scrambled the traditional strategy of marketing to consumers via well-defined communities, aesthetic-driven tribes and subcultures.

Where Millennials might have temporarily tried on identities as hipsters or emos or floggers, Gen-Zers jump much more swiftly from e-boy to #cottagecore to Y2K. Internet culture, virality and the accelerated trend cycle lead to faster shapeshifting, to the point where taste becomes ambiguous and even contradictory.

The key is to connect with these consumers where they are, rather than trying to tell them where to go.

The easiest way to do this is to interact with fans online, who will tag the brands they’re wearing without being prompted. The brand can then respond with likes, comments, reposts or even partnerships.

Pushed too far, this strategy can lead to the same flash-in-the-pan results, with brands trying to turn “casual” online interactions into the next viral post, overlooking how incongruous the current viral trend may seem in relation to them.

High fashion brands may not be quite ready to cede control, even as they get more comfortable with TikTok. Prada launched its bucket hat challenge by directing TikTok users to “show your Prada side.” Influencers like Cristian Dennis and Jordan Huxhold posted videos where they picked up different versions of the hat, then cut to themselves wearing a full Prada look.

The videos all feature the same sound and simple premise, which seems to be to go from being bored to having a good time once putting the bucket hat on. By picking the sound, transition type and timing, and full looks for the influencers, Prada was able to curate the outcome of the videos, though for these same reasons they do not appear as organic as probably intended.

“On the one hand, brand loyalty is dead… on the other hand, brands are now expected to play a bigger role in young consumers’ lives,” said Natalia Christina, director of brand and strategy and The Digital Fairy. “The ones that get it right are intrinsically bonded to their consumers, building emotional connection and therefore loyalty.”

How to Work With TikTok Talent

What #BamaRush Says About Fashion’s Future on TikTok

How Brands Go Viral On TikTok