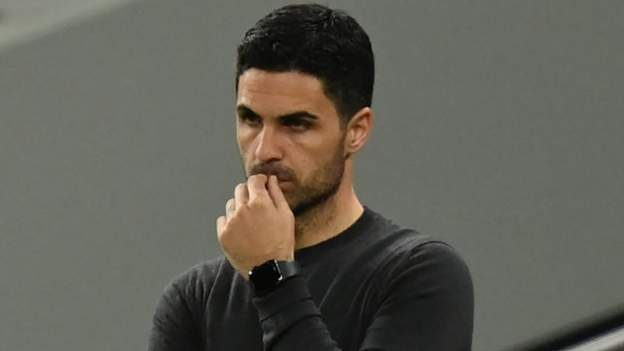 Arsenal boss Mikel Arteta said “a beautiful game was destroyed” as his side suffered a damaging blow in their top-four hopes with a north London derby defeat at Tottenham.

Spurs won 3-0 to move within a point of their rivals with two games remaining.

Tottenham’s opener came from the penalty spot before Arsenal had Rob Holding sent off.

“If I say what I think I am suspended for six months,” said Arteta when asked about the officiating.

“I am not unhappy with my players. I am proud of my players. I want the referee to come in front of the camera and explain his decisions. It’s a shame because such a beautiful game was destroyed.

“The decision was made. We can’t change it. The referee has to make a decision in football.”

Tottenham manager Antonio Conte declined to add his opinion on the decisions but didn’t hold back on his opposite number.

“He has to continue to work because he’s a very good [coach]. To hear someone complain all the time is not so good.

“At Liverpool [on Saturday] do you hear me complain about Fabinho and all the fouls? No. He can take my advice if he wants, but if not I don’t care.

“I listen and he complains a lot. I think that he has to be more focused on his team and not to complain because he has just started his work. He has to be calm and try to continue to work. To listen to a coach complain a lot of the time is not good.”

‘Everything is open’ in top-four battle

Harry Kane scored twice at a raucous Tottenham Hotspur Stadium, converting the early penalty before heading in a second. Son Heung-min made it 3-0 in the second half.

A win for Arsenal would have cemented their place in the top four but now the race is wide open.

Chelsea, who are third, are almost there with five points between them and Tottenham, leaving Conte’s side and the Gunners most likely battling it out for fourth place.

Spurs host relegation-threatened Burnley on Sunday before finishing the season with a trip to relegated Norwich on Sunday, 22 May.

Arsenal’s remaining fixtures are more tricky on paper as they head to Newcastle next Monday and conclude the campaign at home to Everton, who may still need a result to secure Premier League survival.

“We have two games to go. Everything is open,” said Tottenham boss Conte.

“The confidence has to come from the work we are doing every day. For sure to win an important game against Arsenal, the importance of the game to our fans, has to give us confidence.

“When you win the confidence starts to increase but at the same time you have to not become presumptuous. This is the danger. I will try to keep the situation under control and push my players in the right way.”

‘Tottenham have the momentum’

Arsenal have not played in European football’s elite club competition since the 2016-17 campaign while Tottenham, runners up three years ago, played in the Europa Conference League this season.

Former Liverpool and Tottenham midfielder Jamie Redknapp believes the importance of securing Champions League football next season has ramped up the pressure on both sides heading into the final two games.

“Making the Champions League is a game-changer for Arsenal and Tottenham,” he said on Sky Sports.

“For Arsenal, they are a year ahead of where they think they should be. No-one expected this. For Tottenham, attracting players and keeping the manager here, Champions League has to happen. This is why it was such a big game.

“Arsenal know what they have to do but Tottenham have better fixtures.”

Former Arsenal defender Matthew Upson feels it is advantage Spurs now they have the momentum.

“Off the back of this result Tottenham’s confidence is sky high,” he told BBC Radio 5 Live.

“From an Arsenal point of view, at this moment in time they are at a low. They have to go away to Newcastle and that is a difficult place to go at the best of times.

“At this moment in time, Spurs look good. They are chasing Arsenal down. Arsenal will have to win both of their last two games. Tottenham will win theirs.”