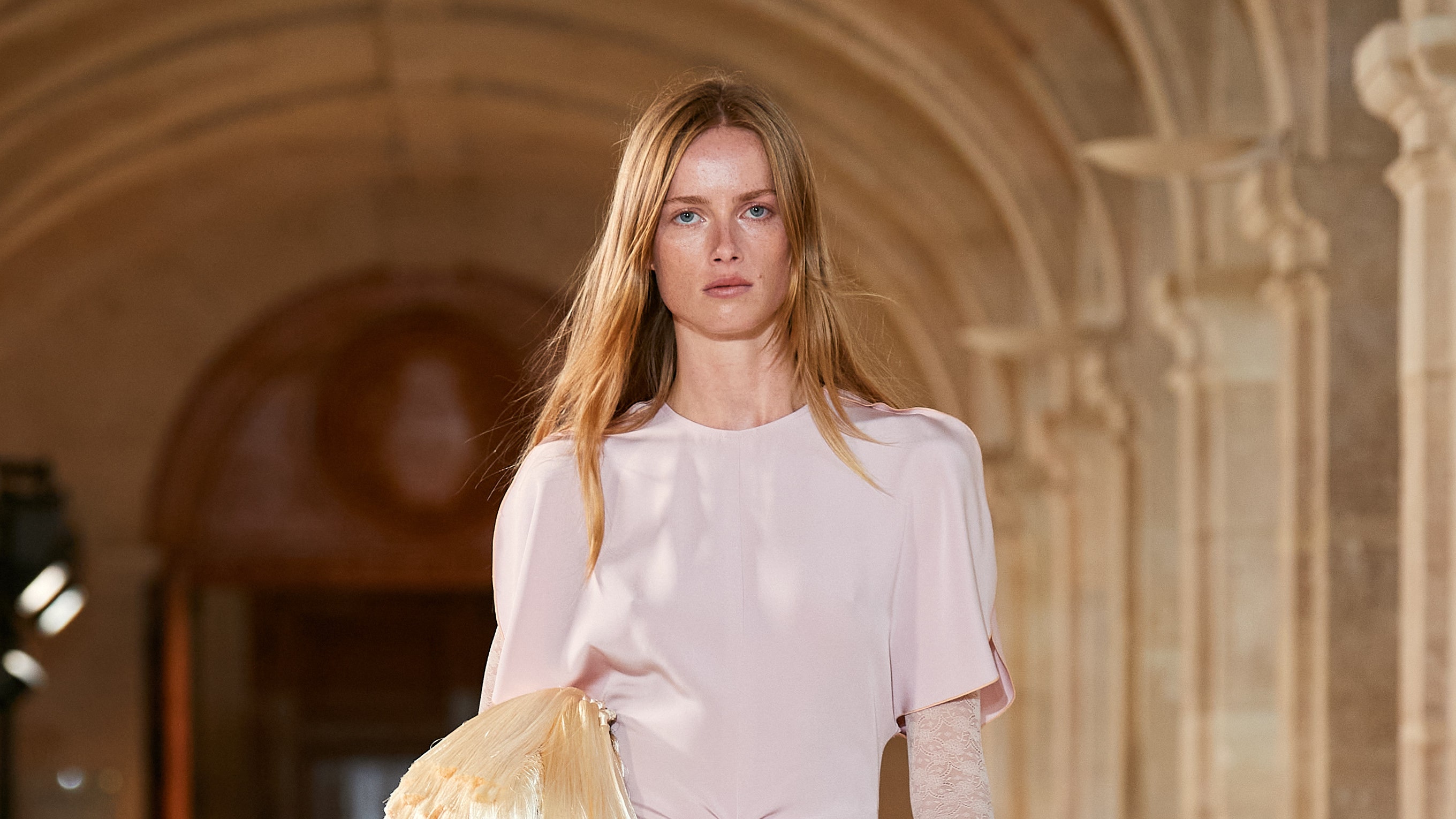 Victoria Beckham’s first-ever show in Paris took place on the Friday afternoon of this hallowed Fashion Week schedule. The day before, Rick Owens presented tulle gowns the red of ox blood; in the morning Loewe showed shoes made of deflated balloons; and God only knows what Comme des Garçons has up its mastodon sleeve for Saturday. Invited to the French court of these avant-garde giants, Beckham—who started out in New York and relocated her show to London for her brand’s 10th anniversary—has reached the final chapter in her Heroine’s Journey into Fashion: the Approach to the Innermost Cave.

“Things feel perfectly complicated,” she quipped during a preview for a collection that demonstrated all the knowledge she has accumulated during her 10-plus years as a fashion insider—and all the ambition she still harbors. She filled the cloisters of the church within Val-de-Grâce—the military complex where Yves Saint Laurent was hospitalized after his conscription breakdown—with a haunting aria from Madama Butterfly and layered it with a throbbing, ticking, pungent beat by Chromatics.

It was a fitting fanfare for what unfolded: Rianne Van Rompaey in a medical-pink rigorous, ankle-length dress sheathed over her body, its sleeves slit to the shoulder, its waist stitched at the front and pulled apart with strict ruching. Beckham underpinned it with opera gloves in VB-monogrammed lace the color of the model’s skin, matching tights, and high satin heels with almond-shaped toes. It was pretty twisted; a kind of delectably perverse glamour only outdone by the deviation of a bag made of blond-hair-colored tassels that poured out over Van Rompaey’s arm.

“It’s a big deal for me to do a show in Paris. It’s been a dream, and therefore the collection has to reflect that,” Beckham said. In the process, she took no prisoners. The months before had seen her restructure her London ateliers to facilitate the artisanal level called for by a Paris show, allowing for the perhaps easy-looking but highly complex construction of dresses such as the aforementioned. It paved the way for beautifully and psychotically draped dresses—some seedily worn over latex tights and gloves—deconstructed cami dresses that looked as if they were about to slip off the body, and perversely bias-cut fishtail gowns in more medical pastels. A black dress was adorned in slashes as if it had been clawed into. Seen in stern succession, these silhouettes were a little bit evil, and incredibly flattering.

Beckham’s lifelong fashion education has clearly taught her a thing or two about subversion. If she’s demonstrated her taste for the “wrong” and “weird” before, this collection flexed a side to her practice that felt like virgin soil. Next to coats with edges cut to reveal their construction and trompe l’oeil leather jackets with the imprint of lapels, tailored jackets had been deconstructed at the back and reduced to their core frame, exposing the naked body. It was an intelligent (and quite Belgian) way of cutting that suited Beckham’s codes and pushed her into a game played by the big guys.

“I can’t believe it’s finally happening. I’m very proud of where we’ve come,” she said of her Paris adventure. “With this show, I have enjoyed every single step of the way. When you think of everything we’ve been through, to be doing a show in Paris as an independent brand, it’s a really big deal. It feels like a real moment.” Beckham’s French fashion debut was an ambitious, dramatic, and quite sexual experience, which spoke volumes of her excitement for fashion. And on the day-to-day hamster wheel of Fashion Week, dedication like that is really quite rare.