Mid-century-inspired acrylic handbag label Edie Parker launched in 2010. With a pivot into cannabis products including fruit-shaped pipes, rolling papers and lighters, and even pre-rolled joints sold through dispensaries, the brand is leaning into its motto, “for a good time.”

Edie Parker has sold cannabis accessories under its Edie Parker Flower sub-label since 2019, including some THC-infused products via dispensaries in California. But the legalisation of cannabis in more states has created opportunities to expand. Edie Parker-branded THC pre-rolls went on sale state-wide in Massachusetts dispensaries in October, with expansion in Illinois slotted for early December. A New York City flagship, selling both bags and cannabis accessories, will open next week (New York legalised recreational marijuana use earlier this year, but the rules around selling are still being ironed out).

A handbag company that also sells drug paraphernalia – let alone actual branded cannabis – is an odd pairing. But fashion and cannabis are not strangers, especially since many US states began decriminalising marijuana in the 2010s. Smoking-centric labels like Sundae School have grown in popularity, and entrepreneurs sell rose gold vape pens and other luxe accessories. Barneys debuted a cannabis accessories edit in its Beverly Hills store in 2019, and M Missoni collaborated with cannabis brand Pure Beauty on pre-roll packaging in February 2020.

Edie Parker founder Brett Heyman said the move into cannabis represented an opportunity for expansion into a fast-growing category that was a good fit for her brand. Through cannabis, Edie Parker has access to a whole new consumer, who is not the same shopper it found through retail partners like Nordstrom and Saks Fifth Avenue. Heyman said after Flower is introduced in new states, she anticipates its sales will match handbags within six months (the line is also available in retailers such as Urban Outfitters and Lisa Says Gah).

“Cannabis is a little bit, for us, like an accessory and a little bit a part of this lifestyle that we’ve been speaking about at Edie Parker forever,” she said. 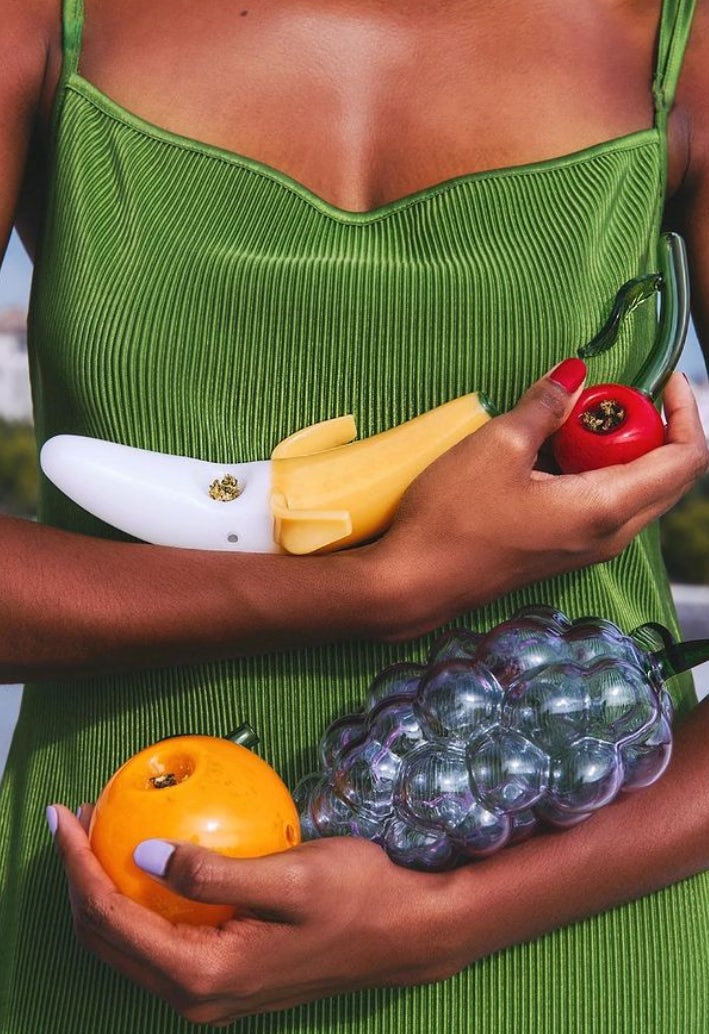 Cannabis is still banned at the federal level, so companies producing marijuana must do everything from growth to sale within the borders of states that have legalised its sale. In Massachusetts, for example, Edie Parker Flower works with a licensing partner, Ascend Wellness Holdings, to sell through legal dispensaries. Ascend also operates in Illinois, Michigan, Ohio and New Jersey.

The brand is leaning into its new product line. While the New York flagship can’t sell weed just yet, it is designed to feel like a smoke-friendly space with plenty of greenery and custom wallpaper. It’s a repeat of an experiment Heyman tried at her old Madison Avenue store, where she swapped out some bags for lighters and other accessories to create a smoke shop feel; it wasn’t uncommon for her Upper East Side clientele to buy a bag for themselves and rolling papers for their kids, she said.

“All these things we didn’t expect to happen in that environment happened because it was like ‘Oh this feels not grungy, not taboo. It feels exciting and sort of elevated,’” said Heyman.

Heyman said she recognises that part of working in the cannabis market means addressing historical inequities in policing the plant. The brand launched The Edie Parker Foundation to support women and children whose lives have been affected by low-level drug offences, and racist enforcement of cannabis prohibition. Overall, Heyman hopes the art-forward objects meant to be displayed and carried will lessen stigmatisation of cannabis use.

Edie Parker and Edie Parker Flower must legally operate as separate entities, but Heyman sees plenty of opportunities for crossovers. She already sells a few clutches with lighters built in, and with slogans like “Pot is Hot” emblazoned on them.

However, cannabis is still only legal in around half of US states, a fact that makes Heyman worry about being too early, particularly in a sector rife with regulatory hoops. Emily Paxhia, co-founder of cannabis investment fund Poseidon, had the same set of concerns when starting out, but ultimately thinks being one of the first to arrive will benefit the brand.

“You have to be a little bit early in these areas because you have to help to define the paths,” said Paxhia.

Anja Charbonneau, founder of arty weed-centric magazine Broccoli, added that fashion can be a vehicle for easing people into something new and once-taboo.

“It kind of takes this like a tap of approval from someone respected in another space to give justification and validation to the cannabis world,” she said.

Heyman anticipates that as the market grows, there will be consumers who will want to have a similar experience buying weed that they do in a fashion boutique.

“Very simply, when you think about whether there will be more people smoking cannabis in a year, five to ten years, than less? I think the answer is yes,” she said. “So there will be an opportunity to sell cannabis accessories.”

Is There a CBD Bubble?