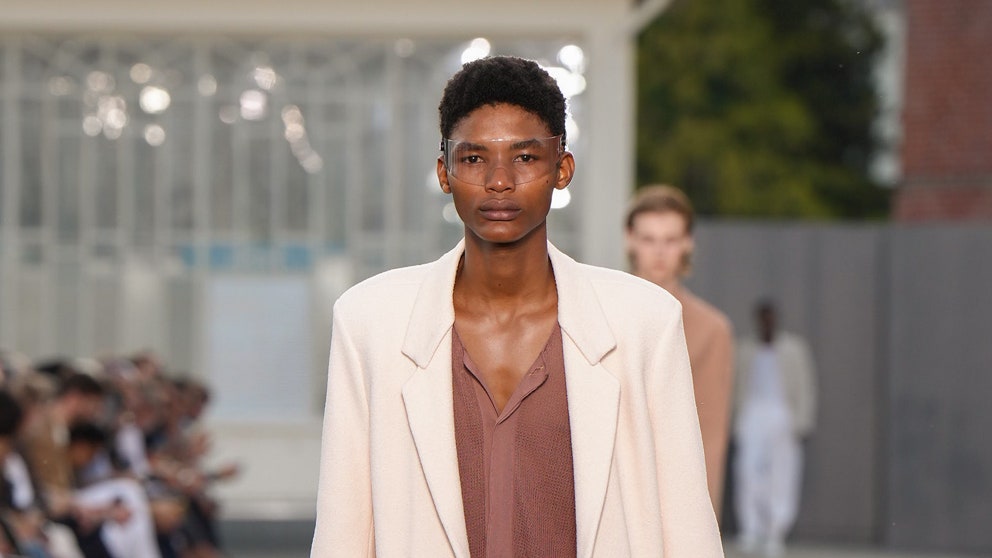 What was the star at this Zegna show: the location or the collection? You might as well ask that old chestnut about the chicken or the egg. Because the point that Alessandro Sartori was making this evening by bringing us 120km out of Milan to Trivero, site of the mill founded in 1910 by Ermenegildo Zegna, was that one depends upon the other—and vice versa.

It was obvious this that attractively vintage mill, whose machines had been fired up to clatter and roar impressively as we walked through it to the rooftop showspace, and whose soaring brick chimney was somehow rigged to emit a (presumably harmless) black plume as the models walked, was emblematic of the industrial cause of which Sartori’s collection was the ultimate effect. The several hundred people who work here and several thousand more who work for Zegna across the world are of course invested in Sartori’s products and those of Zegna more broadly bringing home the bacon.

A more interesting form of inter-relation came from considering the models’ more distant backdrop, a roughly-serrated line of richly forested mountains, below which the sun was dropping. Most of these are part of the 100km square Oasi Zegna, a protected swathe of gorgeous Piedmont that the founder started acquiring not long after he founded the mill. Successive generations have since reforested and cultivated the site. By showing us the collection in the foreground whose sale enables the cultivation of the landscape in the background, Sartori was asking us to consider what, really, was the final product here.

If the clothes were merely the by-product that allowed the Oasi to flourish—and Zegna to continue its healthy first year as a publicly listed company—they still had to be compelling to fulfill their function. Sartori is expanding his post-tailoring tailoring aesthetic every season. This time round these developments included new blends of paper and linen used to create rough edged jackets whose traditional silhouettes could just about be traced despite the removal of collar and buttons. There was a strong emphasis on a Zegna-fabricated stiffened terry, which provided textured substance for Sartori-signature shackets and wide, breaky pants. A super fine knitwear coated in some silicone-esque finish, was used in monocolor shirting. The new shoe of the season was an expansion of the house triple stitch sneaker, co-authored by Sartori with Daniel Bailey—I counted 13 pairs of these in the same shade of Zegna brown being worn in the front row across from me.

This collection featured a very distinct color-palette whose unconventional span was in line with Sartori’s unconventional approach to re-evaluating the process of tailoring. A technical nylon rain coat came in an appealingly apricot-ish, dessert wine hue, while a turtleneck half sleeved shirt in that coated-knit fabrication was delivered in a yellow that looked borderline violent. Its impact lessened as dusk drifted towards darkness across the Oasi Zegna.